10 JOKES ABOUT TEACHER AND STUDENT 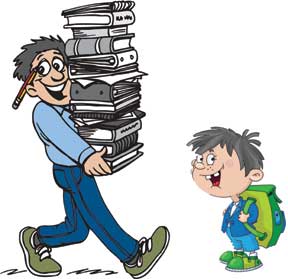 Teacher: George Washington not only chopped down his father’s cherry tree, but also admitted it. Now, Louie, do you know why his father didn’t punish him?

Louie: Because George still had the axe in his hand.


Teacher: John, why are you doing your math multiplication on the floor?
John: You told me to do it without using tables.

Teacher: If you had one dollar and you asked your father for another, how many dollars would you have?
Vincent: One dollar.
Teacher: You don’t know your arithmetic.
Vincent: You don’t know my father.

Teacher: This essay on your dog is, word for word, the same as your brother’s.
Student: Yes, sir, it is the same dog.

Teacher: Here is a math problem. If your dad earned $300 dollars a week and he gave your mother half, what should he have?
Student: A heart attack.

Teacher asked George: how can you prove the earth is round?
George replied: I can’t. Besides, I never said it was.

The teacher of the earth science class was lecturing on map reading.
After explaining about latitude, longitude, degrees and minutes the teacher asked, “Suppose I asked you to meet me for lunch at 23 degrees, 4 minutes north latitude and 45 degrees, 15 minutes east longitude…?”
After a confused silence, a voice volunteered, “I guess you’d be eating alone.”

Teacher: Why are you late, Joseph?
Joseph: Because of a sign down the road.
Teacher: What does a sign have to do with your being late?
Joseph: The sign said, “School Ahead, Go Slow!”

Physics Teacher: Isaac Newton was sitting under a tree when an apple fell on his head and he discovered gravity. Isn’t that wonderful?
Student: Yes sir, if he had been sitting in class looking at books like us, he wouldn’t have discovered anything.

Posted by pratanacoffeetalk at 8:52 AM