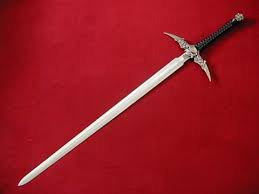 One day the emperor was presented with a deer. Unscrupulous Lord Zhào, seeking to test the loyalty of the courtiers declared it to be a horse. Other courtiers, afraid to offend the powerful Lord Zhào, agreed that it was a horse, but Kuāng denied this, and declared that Zhào was mistaken.

Furious, Lord Zhào arranged to have Kuāng's Cosmos Sword stolen, and he hired a thuggish assassin to use it to make an assault upon the emperor. The attempt was thwarted and the assassin killed, but the discovery of the sword led to the emperor's having Lord Kuāng and nearly all his family arrested and eventually executed.

Only the dashing young Kuāng Fú escaped, and then only because his wife, Zhào Yànróng, the wily daughter of Lord Zhào, addressed a servant as "husband," causing the servant to be arrested and executed while her husband, disguised as a servant, escaped. She herself, being the daughter of Lord Zhào, was spared, but forced to return to her father's house.

In time, the emperor got word that Zhào had a beautiful daughter, and wished to make her his concubine, a plan that pleased her father but was unacceptable to Yànróng herself, who was very much in love with her fugitive husband.

Introduced to the emperor, the wily woman feigned madness, and was crass and abusive to him. He responded by pretending to order her executed, but she in turn pretended not to understand and continued to excoriate him.

At length the emperor decided that she really was quite mad, and he sent her away. Thus in the end, she managed to escape and join her husband in exile. And they lived happily ever after.

Posted by pratanacoffeetalk at 8:22 AM