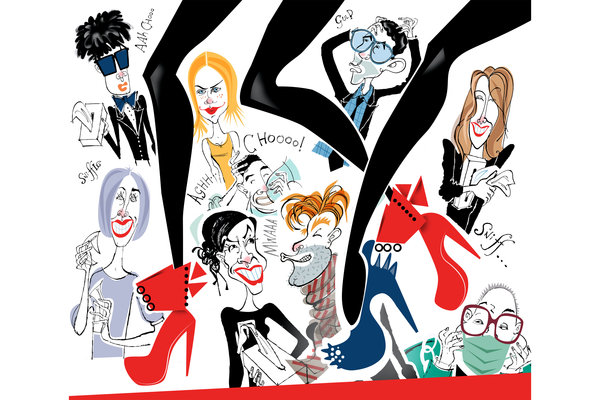 A top fashion designer quarantines a sneezing underling, forcing her to work in a closet. An industry P.R. executive makes colleagues douse their hands with Purell. Germ-phobic magazine editors are powerblasting offices with antiseptic wipes and Lysol.

Such is the dread gripping the fashion world as it prepares for New York Fashion Week, beginning Feb. 7, with a killer flu and a stomach-bug norovirus on the loose.

The eight-day event, when fashionistas from around the world pack into small spaces to attend runway shows and parties — only to cram onto the same flights and repeat the process in London, Milan and Paris — is always an occasion for sickness paranoia. In past years, sniffles in the front row could prompt icy stares and social ostracism.

But with this season’s flu panic, the fear is approaching hysteria. Stressed-out designers recoil in horror if someone coughs within earshot. Frail models shiver their way between fittings, terrified someone will spy their runny noses. And frenemies everywhere are reconsidering the wisdom of the double-cheek kiss, the standard greeting of the global fashion tribe. Air kissing seems safe for now.

“This will be the season where everyone in fashion becomes mysteriously nonaffectionate,” said Laura Brown, executive editor of Harper’s Bazaar. Staff members in her West 57th Street offices, she added, have been scouring doorknobs with sanitizing wipes. “We can give a nudge and a wink instead.”

To be fair, much of the paranoia is founded. According to the Centers for Disease Control and Prevention, deaths from the current flu season reached “epidemic” levels, in part because of an unusually severe flu strain. Adding to the flulike epidemic is a surging new strain of norovirus, which can cause sudden diarrhea and projectile vomiting, and the worst whooping cough outbreak in 60 years.

And while there is some evidence that the flu season has peaked almost everywhere in the country, except for the West Coast, flu activity continued to be high in New York through the week ending Jan. 19, as tracked by the C.D.C., and on the rise in parts of Europe including Italy. (Milan hosts a fashion week starting Feb. 20.)

Norovirus also seems to be surging abroad; it has reached epidemic levels in France, according to the latest report from the country’s doctor network Réseau Sentinelles, with more than one million French people visiting doctors for it in the past five weeks.

Yet even as flu season appears to be ebbing in New York, it remains a worry inside the fashion bubble. With sleep-deprived colleagues huddled in close quarters day and night, things can go viral quickly, especially in the petri dish that is Fashion Week.

“Fashion people are at risk for a variety of viral syndromes because they work long hours and they move in a pack,” said Dr. Robert Glatter, known in fashion circles for making house (or studio) calls.

Dr. Barry Cohen, whose primary-care office on Spring Street faces Marc Jacobs’s studios, says he has been bombarded with rheumy-eyed industry divas begging for quick fixes. “Fashion people touch each other all day, so they get exposed over and over,” he said.

And when the pack is moving fast and furious, it can’t slow down for the weak. “Fashion Week season is a nonstop assault on the immune system,” said Derek Blasberg, an editor at large for Harper’s Bazaar. “Early shows, late dinners, crammed into tents and airplanes: you don’t want to sit next to anyone coughing, because if you get sick, you’re screwed.”

The viral assault does not end with New York. “By the time we finish the New York shows, we’re already a wreck, because New York simply has too many shows,” said Mickey Boardman, editorial director of Paper magazine. “Then you get on a plane and hit the ground running in London, where there’s always fun parties. You’re eating French fries for dinner and drinking Cokes from your minibar, and your sleep patterns are messed up.”

“You’re putting your life at risk,” he added.

WHILE KEEPING THE WORLD trendy has its hazards, fashionistas have developed stylish tactics to avoid getting the bug. Many have dutifully gotten their flu shots. (It’s not too late, though it takes about two weeks to build up immunity — just in time for London Fashion Week.)

Others follow variations of what could be called the standard fashion-world starvation diet, whether it’s drinking large quantities of SmartWater fortified with packets of the vitamin supplement Emergen-C, or force-feeding themselves nothing but raw greens, like koalas munching eucalyptus leaves. Dr. Glatter says he has even treated some fashion people for diarrhea from eating too much kale.

Then there are the juicers. The designer Cynthia Rowley swears by Juice Press, the three-year-old Manhattan chain popular with fashion insiders for its 17-ounce $10 bottles of cold-pressed fruits and vegetables. “I’m addicted,” said Ms. Rowley, who added that she chugged the stuff with staff members when they were not taking spin classes en masse at SoulCycle.

“Nobody’s sick at my office,” she bragged dangerously. “We work in one room, so if one person drops, they take down the whole team.”

Other fashion folk curb their desire to touch what they love most: beautiful people and sleek surfaces. The stylist-turned-designer Rachel Zoe swears by airplane wipedowns. “I never touch doorknobs, wash my hands constantly, and I can’t pass a sanitizing dispenser without using it,” she said.

Bottles of Purell, it seems, can be found inside every Céline Trapeze bag — sometimes to the fastidious user’s detriment. Dr. Glatter said that he recently treated a fashion publicist whose hands were cracked and red from slathering Purell every 10 minutes, like Lady Macbeth with a BlackBerry.

When all else fails, there is quarantining by the fashion police, especially when the looming deadline of shows means that underlings can’t be sent home. Jeffrey Costello and Robert Tagliapietra, of the design team Costello Tagliapietra, said they knew of a top women’s wear designer who made a sniffling runway-show producer work alone all week in a closet. “She was humiliated,” Mr. Costello said of the producer, “but wasn’t going to let that get in the way of getting paid.”

For some, the flu has even informed fashion choices. Nina Garcia, the creative director at Marie Claire, she said had been wearing a black Hermès cashmere scarf around her mouth everywhere this winter. “I try not to breath anybody else’s air,” she said.

But the true key to health, fashion veterans say, is to avoid the late-night partying fashion weeks are known for. “This year, I’m saying, ‘No, thank you,’ to the tempting myriad cocktail parties and openings and ‘No’ to the nightcaps,” said Linda Fargo, senior vice president of Bergdorf Goodman.

The publicist Kelly Cutrone said she would not let her junior staffers drink at night events. “Fashion Week parties are not for people who work in fashion,” she said. “You can’t go to the V party and the Purple party and the Elle party, and hang out all night with the Misshapes and still be on top of your game.”

BUT DESPITE THEIR BEST EFFORTS to maintain high-gloss good health, fashionistas are mammals, too, and sometimes break down. Such a sight is never pretty, especially at a runway show. “I’ve seen people faint,” said Simon Doonan, the creative ambassador for Barneys New York. “It’s never a good look. Your legs are akimbo.”

Mr. Boardman of Paper recalled sitting in a Chanel show in Paris four years ago, suffering from a stomach bug. “Suddenly I had to violently go to the bathroom,” he said. “I could see the headline the next day: ‘Fashion Editor Messes Himself at Grand Palais.’ ” He barely made it through the 12-minute show. “That was the only Paris show I made,” he said.

Public sickness can also breed ostracism. A few seasons ago, Haidee Findlay-Levin, a stylist, was boarding a New York-Paris flight with a bad case of the flu, when she ran into a prominent designer and her business partner. As they leaned in for a double-cheek kiss, she alerted them to her illness.

“They backed away like I had the plague,” she said. The awkwardness was compounded by having to sit between them. “They took sleeping pills and put blankets over their heads, and ignored me while I sat there, afraid to cough.”

Models, in particular, seem to be susceptible. “We’ve had many incidents of models fainting, puking, passing out and breaking into a cold sweat,” Ms. Rowley said.

Ava Smith, a 24-year-old model who plans to walk this season for Chanel and Valentino, remembers getting sick in London last year. “My eyes were bulging out of my head, my nose was Rudolph red, and I had Kleenex stuffed in my clothes as I walked the runway,” she said. “We were all one massive cluster of mucus.”

Such grim stories raise the question: why don’t fashion people simply remain in bed if ill? “Stay home and watch the shows” online, Mr. Doonan implored. “Thinking you need to be there even if you’re communicating the flu is demented.”

Then again, there are the Darwinians who believe that collections season separates the warriors from the lightweights. “Last fashion week, I woke up with my head about to explode,” said Leandra Medine, who writes the popular fashion blog Man Repeller. “I stood in front of the mirror and I said, ‘You are not sick and you are going to make it all the way through Altuzarra at 8 p.m. tonight and be a champ.’ ”

She did just that. “Then,” she added, “I came home and collapsed.”

Posted by pratanacoffeetalk at 9:12 AM