CUFFLINK FROM THE BULLET JUDI DENCH FIRED IN SKYFALL 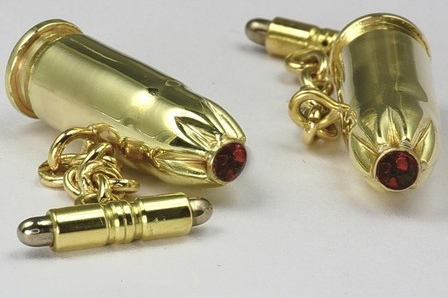 SHE might have been given the bullet from the James Bond movies, but a special memento proves Dame Judi Dench is a true jewel in the 007 series crown.

The star of stage and screen, who lives in Outwood, kept four of the bullets from her dramatic departure from the latest Bond film, Skyfall.

She took the props to Nutfield jewellers Roger Elliott Designs to be made into cufflinks, which she would give to her grandson and her daughter's boyfriend for Christmas.

"This was her last Bond movie," said Roger Elliott. "I think she wanted to keep them but was unsure what to do with them, and then together we came up with the idea for cufflinks."

He plated the empty bullet cases with 18 carat gold, set with fine natural rubies and made gold chains and end bars, styled as bullets, and engraved them "Skyfall".

"It seems only fitting that she should have something to remember her time in the films," said Mr Elliott.

Dame Judi, who played M in the box office smash, has appeared in eight Bond films since 1995, with Golden Eye.

This is the second time Mr Elliott has made jewellery for the star; the first was an oyster designed diamond pendant and earrings.

"She has exceptional taste and it was amazing to be able to be part of the creation of these cufflinks," added Mr Elliott.

"It was intricate work," said the 63-year-old. "The finished product looked beautiful and they have come out so well.

"I feel very proud of them and I hope those who received them loved them just as much as I did creating them."

Replicas of the cufflinks are available from Roger Elliott Designs in both silver and gold, costing up to £1,650.

Posted by pratanacoffeetalk at 9:13 AM