BLACKBERRY, REBUILT, AND FIGHT ANOTHER DAY 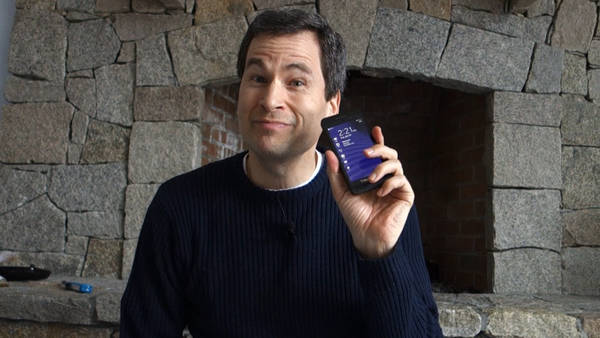 This apology is for the bespectacled student at my talk in Cleveland, and the lady in the red dress in Florida, and anyone else who’s recently asked me about the future of the BlackBerry. I told all of them the same thing: that it’s doomed.

That wasn’t an outrageous opinion. Once dominant, the BlackBerry has slipped to a single-digit percentage of the smartphone market.
The company’s stock has crashed almost 90 percent from its 2008 peak. In the last two years, the BlackBerry’s maker, Research in Motion, released a disastrous tablet, laid off thousands of employees and fired its C.E.O.’s. The whole operation seemed to be one gnat-sneeze away from total collapse.

The company — which changed its name on Wednesday to simply BlackBerry — kept saying that it had a miraculous new BlackBerry in the wings with a new operating system called BlackBerry 10. But it was delayed and delayed and delayed. Nobody believed anything the company said anymore. Besides — even if there were some great phone, what prayer did BlackBerry have of catching up to the iPhone and Android phones now? Even Microsoft, with its slick, quick Windows Phone, hasn’t managed that trick.

And here’s the shocker — it’s complete. The iPhone, Android and Windows Phone all entered life missing important features. Not this one; BlackBerry couldn’t risk building a lifeboat with leaks. So it’s all here: a well-stocked app store, a music and movie store, Mac and Windows software for loading files, speech recognition, turn-by-turn navigation, parental controls, copy and paste, Find My Phone (with remote-control lock and erase) and on and on.

The hardware is all here, too. The BlackBerry’s 4.2-inch screen is even sharper than the iPhone’s vaunted Retina display (356 pixels per inch versus 326). Both front and back cameras can film in high definition (1080p back, 720p front). 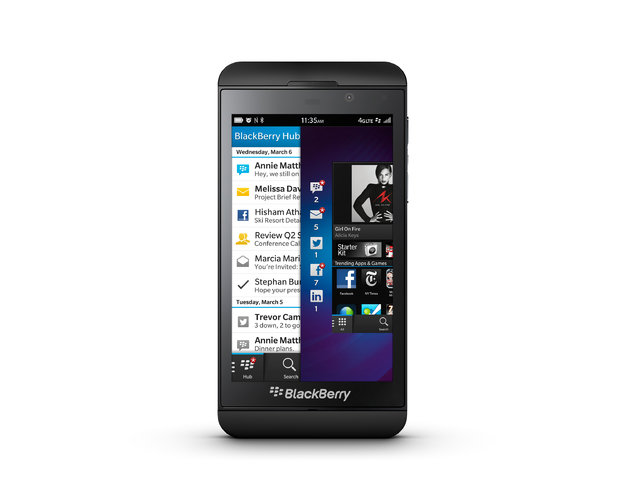 The thin, sleek, black BlackBerry has 16 gigabytes of storage, plus a memory card slot for expansion. Its textured back panel pops off easily so that you can swap batteries. It will be available from all four major carriers — Verizon, AT&T, Sprint and T-Mobile — and Verizon said it would charge $200 with a two-year contract.

Some of BlackBerry 10’s ideas are truly ingenious. A subtle light blinks above the screen to indicate that something — a text, an e-mail message, voice mail, a Facebook post — is waiting for you. Without even pressing a physical button, you swipe up the screen; the Lock screen lifts like a drape as you slide your thumb, revealing what’s underneath. It’s fast and cool.

There are no individual app icons for Messages or Mail. Instead, all communication channels (including Facebook, Twitter and phone calls) are listed in the Hub — a master in-box list that appears at the left edge when you swipe inward. Each reveals how many new messages await and offers a one-tap jump into the corresponding app. It’s a one-stop command center that makes eminent sense.

The BlackBerry’s big selling point has always been its physical keyboard. The company says it will, in fact, sell a model with physical keys (and a smaller screen) called the Q10.

But you might not need it. On the all-touch-screen model, BlackBerry has come up with a mind-bogglingly clever typing system. Stay with me here:

As you type a word, tiny, complete words appear over certain on-screen keys — guesses as to the word you’re most likely to want. If you’ve typed “made of sil,” for example, the word “silicone” appears over the letter I key, “silver” over the V, and “silk” over the K. You can fling one of these words into your text by flicking upward from the key — or ignore it and keep typing.

How well does it work? In this passage, the only letters I actually had to type are shown in bold. The BlackBerry proposed the rest: “I’m going to have to cancel for tonight. There is a really good episode of Dancing With the Stars on.”

But wait, there’s more. The more you use the BlackBerry, the more it learns your way of writing. When I tried that same passage later, I typed only one letter: the I in “I’m.” Thereafter, the phone predicted each successive word in those sentences, requiring no letter-key presses at all. Freaky and brilliant and very, very fast.

There’s speech recognition, too. Hold in the Play/Pause key to get the Z10’s Siri-like assistant. Siri-like in concept, that is — you can say “send an e-mail to Harvey Smith,” “schedule an appointment” and a few other things — but it’s slower, less accurate and far narrower in scope. You can also speak to type, but the accuracy is so bad, you won’t use it.

The camera software is terrific. One feature, Time Shift, is mind-blowing. You take a photo of people — then, with your finger on a face, you can dial forward or backward up to two seconds in time, seeking that perfect expression. You repeat with the next face, and the next, until you’ve dialed up the perfect fraction of a second, independently, for each person in the shot. Admit it: that’s brilliant.

The BlackBerry 10 neatly solves a huge problem for corporate techies: how to keep employees’ work phones secure in a world where people also use their phones for personal things. If a company has BlackBerry’s corporate software suite, separate worlds can be created on each phone: personal and work, with distinct calendars, address books, wallpaper and even app collections. They appear together — but without the work password, only the personal stuff is visible.

When the employee leaves the company, one stroke deletes the whole corporate or personal half.

The popular BlackBerry Messenger (BBM) service now lets you make free phone calls and video calls over the Internet. You can even screencast — share what you’re doing on your screen with your conversation partner, like a map, an app or a photographic snap. (BlackBerry 10 required; older BlackBerry models can use BBM only for texts.)

Thanks to NFC (near-field communication), you can shoot a photo, map, Web page, app, file or song to another BlackBerry 10 owner, wirelessly, on the spot. Other phones do NFC sharing, but rarely as simply.

There are some missteps. There’s no physical silencer switch (only a software function). In the Mail app, you can’t move from one message to the next without returning to the in-box in between. The calendar views don’t rotate when you turn the phone, and you can’t drag appointments to reschedule them. When you’ve used the faux Siri to dictate a message or e-mail, you can’t edit it, even manually. And the battery barely makes it through a day.

But the usual Achilles’ heel for a new type of smartphone is the apps. Who could catch up with the 750,000 apps available for iPhone or Android? (The BlackBerry Z10 doesn’t run older BlackBerry apps.)

Incredibly, BlackBerry says that there will be 70,000 apps available on Day 1. The company shrewdly wrote a utility program that can convert Android apps, making it simple for programmers to adapt their wares.

That’s a well-stocked salad bar, but it’s not the whole grocery. Most of the big-name apps are already there (Skype, Yelp, Twitter, Spotify, Foursquare, Dropbox, Angry Birds and so on), but a few important ones are still missing: Netflix, Draw Something, Pinterest, Hipstamatic, Instagram and most airline and bank apps.

Those apps will surely materialize if BlackBerry 10 is a success. The question is, Will it be one?

The software is simple to master, elegantly designed and surprisingly complete. It offers features nobody else offers, some tailored to the corporate world that raised BlackBerry aloft in its glory days.

Remember, too, that 80 million people still carry BlackBerrys, and many have a deep love for the BlackBerry Way.

On the other hand, wow, is this horse late to the race. The BlackBerry music, movie and app stores are just getting under way. If you choose BlackBerry over iPhone or Android, you give up some very attractive ecosystems, like the way Apple synchronizes your calendar, messages, and photos on all your gadgets. Or, for Android, the similar conveniences of Google Voice and Google Maps.

These days, excellence in a smartphone isn’t enough. Microsoft’s phone is terrific, too, and hardly anyone will touch it.

So then, is the delightful BlackBerry Z10 enough to save its company?

Honestly? It could go either way. But this much is clear: BlackBerry is no longer an incompetent mess — and its doom is no longer assured.

Posted by pratanacoffeetalk at 8:58 AM