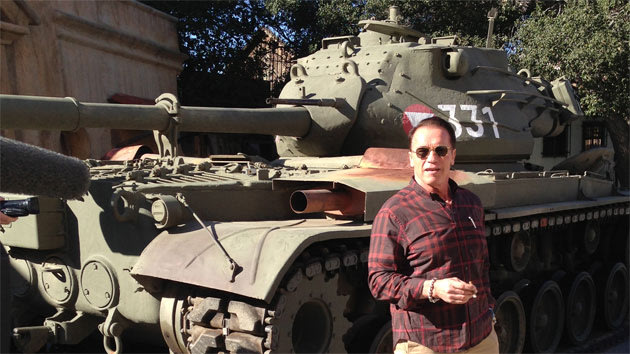 Arnold Schwarzenegger owns his own tank.  Because of course he would.

If any private citizen was going to possess their own tank, obviously it would be Arnold Schwarzenegger.  But it’s not just for joy rides and smashing cars – though he did drive me around on it, and he did roll over and flatten an old clunker with it.  It’s a tank that does have personal meaning to him, and he uses it for an altruistic purpose.

The tank in question in an M47 Patton. Produced between 1951 and 1953, the 50-ton behemoths are still in service across the globe 60 years later. And Schwarzenegger told me and an assembled group of around 15 journalists on Friday that this was “exactly the very tank that I drove in the Austrian Army when I was 18 years old.”

Schwarzenegger was required to serve at least a year in the military, and he told us he went in right after finishing trade school.  He said, “I learned how to drive the tank, which was always my fascination, I think, because I grew up after the war, and I saw the British troops that occupied our area. So I always wanted to be a tank driver.” 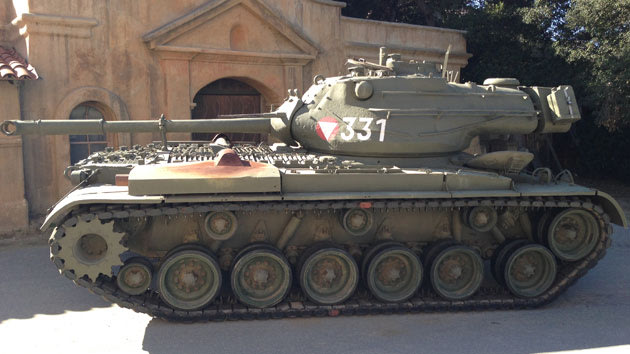 Schwarzenegger recounted how they would go off on maneuvers for weeks at a time. In the evenings, they would dig out a trench that he would roll the tank over, and he and his crew would sleep on the dirt underneath.  He also revealed that the side of the tank featured a large tool box, but he used his to house his weightlifting equipment. He kept his barbells and dumbbells on hand so he could train every night while they were away from base.  That way he was able to stay in shape so that a few months after leaving the service, he was able to compete in his first Mr. Universe competition in 1966.  He came in second that year, and then won the amateur title the next (and the pro title the three following years). 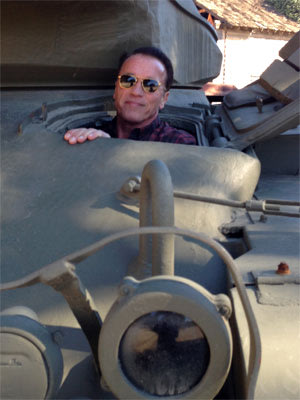 Schwarzenegger said he obtained the tank in 1992 and brought it to this country intending it to be part of a planned Planet Hollywood establishment in Las Vegas. That didn’t pan out, so now the tank resides at the Melody Ranch Motion Picture Studio just outside of Los Angeles. Melody Ranch formerly belonged to Gene Autry, and countless classic Westerns were and continue to be shot there, including the recent “Django Unchained.”  The ranch is also home to a collection of military vehicles used in making movies, and owners Renaud and Andre Veluzat have spent the past number of years restoring the tank.  They put a new engine in the M47 and replaced the treads, so the old machine, now in its sixth decade, can still rip it up (the tank, I mean, but I suppose the same can be said of Schwarzenegger himself).

Schwarzenegger uses the tank for loftier purposes than just giving film journalists a thrill – though it does that exceptionally well.  He told us he mostly uses it in coordination with his foundation, which for 20 years has been dedicated to creating after-school programs across the country.  As an incentive for inner-city kids to stay in school and off the streets, he invites groups of students up to the ranch to take rides with him.

As for my trip on the tank, I got to stand on the outside of it hanging on to a grip on the turret as Schwarzengger sat in the driver’s seat (yes, he really drove it by himself).  He gunned it, approaching the tank’s top speed of 30-some mph.  The ride was surprisingly smooth, and it could take sharper corners than you would expect.  I had to duck more than once to avoid getting smacked in the face by tree branches.  The roar of the engine was deafening, but you could still smell Schwarzenegger’s cigar smoke above the exhaust.  And then, after all the journalists got to take a few laps, he drove straight over a car just to show off.

The whole event was in support of “The Last Stand,” Schwarzenegger’s return to action-hero stardom after a decade away.  He called his brief appearances in Sylvester Stallone’s two “Expendables” movies “a good warm-up to get back into the business.”  He revealed he worked for just four hours on the first “Expendables,” and four days on last summer’s “The Expendables 2.”  Schwarzenegger added, “I told Sly that maybe if ‘Expendables 2’ does well on the next one I’ll work four weeks.” 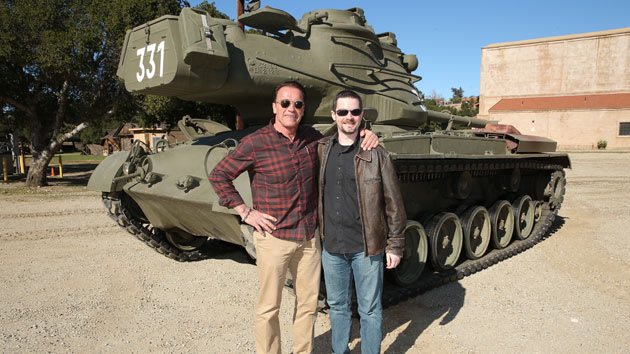 In “The Last Stand,” Schwarzenegger plays a former LAPD officer who has retreated to a quieter life as a small-town sheriff, only to be thrust back into action when an escaped drug kingpin barrels his way.  Also starring Johnny Knoxville, Forest Whitaker, Rodrigo Santoro and Jaimie Alexander, “The Last Stand” opens nationwide on January 18.

Posted by pratanacoffeetalk at 3:43 PM