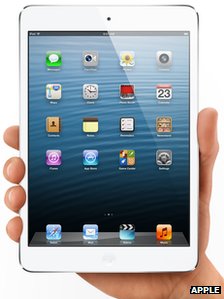 Apple has unveiled its widely-anticipated 7.9in (20.1cm) tablet, the iPad Mini.

The entry wi-fi-only model, with 16GB storage, will cost £269 in the UK and be available on 2 November.

The iPad Mini will compete directly with cheaper similar-sized tablets recently launched by Google, Amazon, Samsung and others.

Apple's vice-president of marketing Phil Schiller told attendees that the device was 23% thinner and 53% lighter than the third-generation iPad, which was released in March this year.

The iPad Mini launch ends years of speculation that Apple was considering launching a new, smaller version of its bestselling iPad range.

In 2010, late founder Steve Jobs described 7in tablets as being "too small".

However, the company's apparent change of heart comes in the face of mounting pressure from its closest competitors, who already offer smaller - and crucially, cheaper - products.

During the presentation, Mr Schiller stressed the importance of being able to hold the device in one hand - a nod to the more travel-friendly appeal of the smaller devices. However, Adam Leach, principal analyst at Ovum, said he had expected the iPad Mini to be more competitively priced.

"We got a mix of a bit of new Apple and bit of old Apple in the same announcement," he told the BBC.

"This is new for Apple to be responding to competitors instead of pioneering their own way.

"It's old Apple as they've gone into this market with a premium pricing strategy.

"At the moment this doesn't place a lot of pressure on the Kindle Fire or the Nexus 7."

He added that the iPad Mini was an indicator that Apple might be nervous about losing its control over a market which it has dominated in recent years.

During the nineties, Apple found itself outpaced in the home computer market by Microsoft and Windows-powered computers - a period of the company's history it will be conscious to avoid repeating.

"The popularity of the Kindle e-reader and the Android smartphones made consumers aware of Amazon content and Google services," said Francisco Jeronimo, research manager at consultants IDC.

"The low price points of the Google Nexus 7 and the Amazon Kindle Fire have been attracting consumers looking for more affordable devices that also come with the content and services they already use or want."

But he added: "This new product from Apple will disrupt the market again. The iPad Mini is now the new category killer."

The devices supporting 3G and 4G data connections would be released "a couple of weeks" later, the company said.

'Kick in the face' Paddy Smith, online editor for Stuff.tv, said some Apple users might see the iPad upgrade as a "kick in the face" as the previous model was just seven months old.

"I think a lot of people will be upset to see a new full size iPad so soon," he told the BBC.

"For many people that represents a pretty major purchase, something you wouldn't want to do more than once a year."

Stuff.tv's Mr Smith agreed that Christmas shoppers could be hesitant.

"I think if they look at the competition and they see that the Google Nexus 7 is £100 cheaper it's going to be hard to ignore that - unless you're buying for a hardcore Apple fan."

However, IDC predicted that the new device would boost Apple's already dominant position in the tablet market.

It forecast that Apple would hold a 68% share of the market in 2012, compared to 29% for Android tablets.

Both would fall off slightly next year with the launch of Windows 8 tablets, IDC said.

The firm also announced upgrades to its Macbook Pro, iMac and Mac Mini ranges of computers.

Its new iMac machines have been made 80% thinner at the edges than previous models, Mr Schiller said.