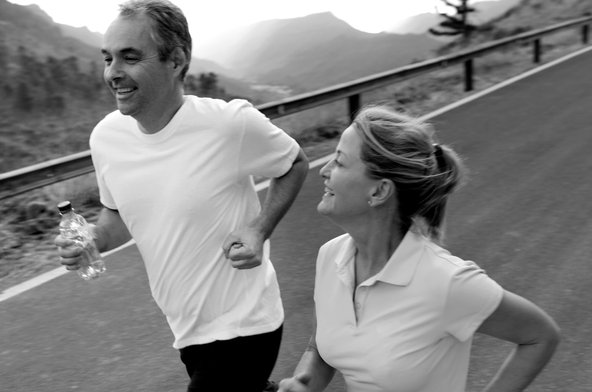 Americans are living longer, with our average life expectancy now surpassing 78 years, up from less than 74 years in 1980. But we are not necessarily living better. The incidence of a variety of chronic diseases, like diabetes and heart disease, has also been growing dramatically, particularly among people who are not yet elderly.

The convergence of those two developments has led to what some researchers have identified as a “lengthening of morbidity.” That means we are spending more years living with chronic disease and ill health — not the outcome that most of us would hope for from a prolonged life span.

But a notable new study published last week in Archives of Internal Medicine suggests that a little advance planning could change that prospect. Being or becoming fit in middle age, the study found, even if you haven’t previously bothered with exercise, appears to reshape the landscape of aging.

The 18,670 men and women, with an average age of 49, were healthy and free of chronic diseases at their first checkup, when they all took a treadmill test to determine their aerobic fitness. Based on the results of this initial fitness test, the researchers divided the group into five fitness categories, with the bulk of the people residing, like most Americans, in the least-fit section.

Then, in a first-of-its-kind data comparison, the researchers checked the same individuals’ Medicare claim records (with permission) from 1999 through 2009, by which time most of the participants were in their 70s or 80s.

What they found was that those adults who had been the least fit at the time of their middle-age checkup also were the most likely to have developed any of eight serious or chronic conditions early in the aging process. These include heart disease, diabetes, Alzheimer’s, and colon or lung cancer.

The adults who’d been the most fit in their 40s and 50s often developed many of the same conditions, but notably their maladies appeared significantly later in life than for the less fit. Typically, the most aerobically fit people lived with chronic illnesses in the final five years of their lives, instead of the final 10, 15 or even 20 years.

While this finding might not seem, on its face, altogether positive — the fit and the unfit alike generally became infirm at some point, the Medicare records showed — the results should be viewed as encouraging, says Dr. Benjamin Willis, a staff epidemiologist at the Cooper Institute who led the study. “I’m 58, and for me, the results were a big relief,” Dr. Willis said.

That’s because, he points out, the results show, in essence, that being physically fit “compresses the time” that someone is likely to spend being debilitated during old age, leaving the earlier post-retirement years free of serious illness and, at least potentially, imbued with a finer quality of life.

Interestingly, the effects of fitness in this study statistically were greater in terms of delaying illness than in prolonging life. While those in the fittest group did tend to live longer than the least fit, perhaps more important was the fact that they were even more likely to live well during more of their older years.

Of course, aging is a complicated process and extremely individualized, with the onset or absence of illness representing only one element in quality of life after age 65 or so. But it is a big element, says Dr. Jarett Berry, an assistant professor of internal medicine at U.T. Southwestern and an author of the study. “And since it appears to be associated with midlife fitness, it is amenable to change,” he continues.

While aerobic fitness is partly determined by genetics, and to that extent, the luck of the universe, much of a person’s fitness, especially by middle age, depends on physical activity, Dr. Berry says.

So, exercising during midlife, especially if you haven’t been, can pay enormous later-life benefits, he says. “Our study suggests that someone in midlife who moves from the least fit to the second-to-the-least-fit category of fitness gets more benefit,” in terms of staving off chronic diseases, than someone who moves to the highest fitness grouping from the second-highest.

And moving out of that least-fit category requires, he says, “only a small dose of exercise,” like 20 or 30 minutes of walking on most days of the week.

“You don’t have to become an athlete,” says Dr. Willis, who himself has little time for exercise but tries to fit in a daily walk. “Just getting up off the couch is key.”

Posted by pratanacoffeetalk at 7:50 AM