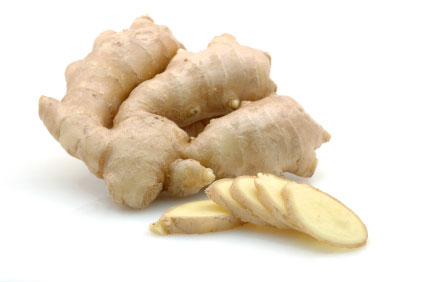 If your mother gave you ginger ale to relieve a stomachache, I’ll bet you thought it was the fact that it made you burp that helped. The burping effect of ginger ale might be one reason you felt better, but the main reason is the curative properties of ginger, one of the ingredients. Ginger has the ability to absorb some of the toxins and acid in the stomach and neutralize them. It also increases the digestive fluids.

If the indigestion in your childhood came spinning around in circles until you fell, there’s new studies that show ginger even reduces motion sickness better than an over-the-counter medication, dimenhydrinate. The study didn’t have them do fancy turns, but instead, blindfolded the 36 volunteers and put them into a chair that spun around in circles. The people that used the ginger lasted 2 minutes longer before becoming ill. Another study gave ginger root capsules and placebos to eighty naval cadets uninitiated to rough waters. Those with the ginger capsules fared far better, showing fewer signs of seasickness like nausea and cold sweats. Besides the fact that it makes your stomach feel better, ginger has many other curative properties that make it a great addition to your meals.

If you suffer from osteoarthritis, there are mixed revues about the use of ginger. A study by RD Altman and KC Marcussen showed that ginger helped to reduce the symptoms created by osteoarthritis in the knee. A different study byBliddal, Rosetzsky, Schlichting, Weidner, Anderson, Ibfelt, et al showed that the pain relief only occurred at first. The tiebreaker however, was a study by Srivastava. The study showed that patients that of the 28 patients, 10 that had muscular discomfort and 18 with osteoarthritis, powdered ginger not only relieved the pain but also the swelling.

Ginger also helps break down the clotting process. This is a very important factor to know if you take blood thinners like warfarin commercially sold as Coumadin. Your blood could become too thin where minor bumps and abrasions become life threatening. Researchers are investigating the possible uses of ginger also as an antioxidant, antifungal, antihypertensive agent and antineoplastic agent. Neoplasm is the mass of cells that form into a tumor that is benign, premalignant or malignant.

The ancient Chinese and Indian men of medicine recognized ginger as a healing herb for thousands of years. In Chinese medicine, ginger has two forms, two names and two distinct properties. Chinese herbals class medicine according to whether it treats a body that is too hot or too cold. A body too cold has a depleted yang and the one too hot has depleted yin. The dried ginger, Gan-jiang, helps nausea, coughs, heart palpitation, rheumatism and other diseases classed as diseases from the body being too cold. Fresh ginger, Sheng-jiang, removes the toxins from the body by making the patient sweat. Its use was similar in India, in fact the use of ginger is still a popular remedy.

If you want to use ginger for any reason listed or simply as a powerful antioxidant, run quickly to the store and purchase a box of ginger snaps. That sounds too good to be true because it is. The easiest method of introducing additional ginger into your diet is with either ginger capsules or a little ginger tea each day. Be aware that there may be a few side effects for particularly sensitive people. If you already take anticoagulants, have gallstones, diabetes or take other heart medication, discuss the use of ginger first with your doctor before you begin a daily regime.

Posted by pratanacoffeetalk at 7:48 AM