Larry McMurtry, the famed author of “Lonesome Dove” and dozens of other books, was walking slowly along State Highway 79 on Friday morning toward this town’s only major intersection. Down the block, more than 150 collectors and dealers were queuing up to bid on 300,000 used books — about two-thirds of the stock of Booked Up, the four-building literary mecca that Mr. McMurtry started here in 1988.


“I’ve never seen that many people lined up in Archer City,” he said. “And I’m sure I never will again.”

Now 76, Mr. McMurtry, the country’s highest-profile book dealer, recently decided to whittle his enterprise down to one building, which will remain open with an inventory of about 150,000 books. He said he expected the single store to be maintained by his heirs.

“One store is manageable,” he said. “Four stores would be a burden.”

This prairie town of fewer than 2,000 people, 150 miles northwest of Dallas, bakes like a piece of flatbread at this time of year. The high temperature on Thursday was 110 degrees, with not a patch of shade in sight. It was the setting for “The Last Picture Show,” the McMurtry novel and its film adaptation by Peter Bogdanovich, and the weekend’s auction was called the Last Book Sale. A playful name on its surface, it had a serious, even grim undertone given the book industry’s anxiety about the future of its printed product.

But Mr. McMurtry insisted that he felt optimistic for younger people entering the business, despite the continuing rise of e-books. “I think a good bookstore will not suffer,” he said. “All the controversies about the Kindle don’t have much impact on the rare book business.”

Eric Stuart, 30, and his wife, Caitlin, 23, came to the auction from Magnolia, Ark., with a 24-foot trailer and 900 broken-down boxes. They’re starting a store called the Full Nelson, named after their infant son. After the first two hours of bidding on Friday, the Stuarts had purchased 17 lots of books. Mr. Stuart estimated their outlay at 60 cents a book. 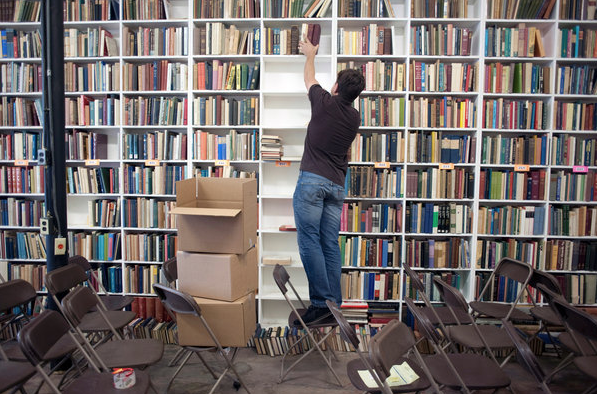 Erin Hahn, 22, and Zachary Stacy, 24, a couple from Austin, hope to start a store in Fort Worth. Asked where any books from Archer City might rest until they secure a retail space, Ms. Hahn said, “In my parents’ garage, probably.”

Several older hands expressed frustration at the tedium entailed by transferring the bulk of their business online. Marshall Hamilton, who runs Blue Awning Books in Austin, said: “I thought I was going to be a bookseller. Turns out, I’m a database expert.”

Maggie McKeown said she was inspired to open McKeown’s Books and Difficult Music in New Orleans eight years ago by “the old Joseph Campbell” philosophy: “Follow your bliss.”

“But he should have added something to that,” Ms. McKeown said. “Maybe, ‘Follow your bliss, if you’re independently wealthy.’ ”

At a barbecue dinner on Thursday night, listening to the plans of younger bidders like the Stuarts, her expression alternated between affection and despair for them. A used bookstore, she said, is “an albatross — a cute one, a literary one.”

“Archer City is the story of trying to revitalize a town,” he said. “We’re looking to take Larry’s model and bring it to Pennsylvania.” 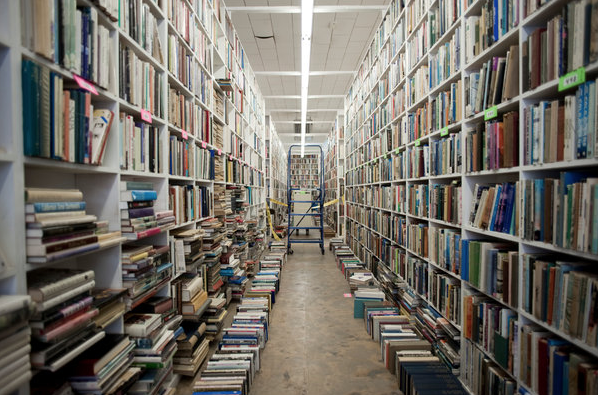 Others at the sale were less concerned with civic dreams than with transportation logistics. Joe Lozano, a collector from Culver City, Calif., said he sold one or two books online for every 100 he bought. He drove to Archer City in a Toyota Corolla with the back seats ripped out, hoping he would buy enough books so that the extra storage space would come in handy. “My wife’s not here to stop me, so we’ll see what happens,” he said.

Asked if he had a truck to transport his loot, Mark Finn, of nearby Vernon, said he had only his Pontiac Vibe. “And I’m willing to make trips,” he said.

For the most part the store’s shelves were organized by subject. But for someone interested in opening a more eclectic store, there were lots like No. 959, which included a collection of humor pieces by S. J. Perelman, a guide to Australian opera singers and “Studies in Ancient Hindu Polity.” Looking at lot No. 418, it was difficult to imagine who might be interested in two copies of “Patton’s 1991 Fantasy Baseball Price Guide.”

It was easy to find the complication of stereotypes over the weekend, fitting for a dusty Texas town from where a Pulitzer Prize-winning author has contributed to Harper’s Magazine and The New York Review of Books and has written about his home state with both pride and cynicism.

Mr. Stacy expressed strong feelings against the market effects of Amazon, and he was wearing the oval, black-rimmed glasses favored by French existentialists. But gesturing toward Ms. Hahn, he said, “This is the first auction either of us has been to that wasn’t a livestock auction.”

Michael Addison of Addison & Sarova, the Macon, Ga., auction house that ran the event, said people in his business did not normally jump at the chance to run “shelf sales” because they’re costly to operate and the calling of lots can be soul-crushingly repetitious. He was aiming to achieve an exhausting pace of a lot every 30 seconds over the course of two nine-hour bidding sessions, with breaks for lunch. But he said the chance to work with Mr. McMurtry — “a national treasure” — was too much to pass up. 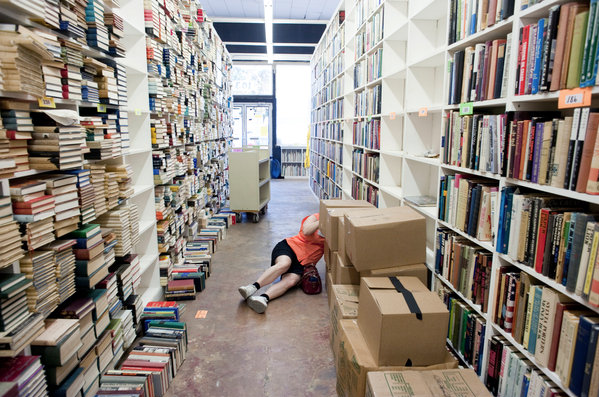 Mr. Addison had fun with one respite from the parade of shelf numbers: 100 individual books that Mr. McMurtry selected for the auction block. Mr. Addison elicited laughs just by reading the title of “Studies in Sublime Failure,” which was won for $40.

A far more expensive item was 1,139 pages of bound typescripts of erotica commissioned by an oilman in Ardmore, Okla., in the 1930s and ’40s.

“I defy anyone to know who wrote those novelettes,” Mr. McMurtry said. “It doesn’t suggest Henry Miller. It may have been just local opportunists.”

Tom Congalton, who runs Between the Covers, the New Jersey-based online bookseller, bought the book for $2,750. He plans to resell it. Mr. McMurtry said he would have pegged the book at $3,000 if he were pricing it to sell, but “it’s not my book anymore.”

“Leaving a million or so in Archer City is as good a legacy as I can think of for that region and indeed for the West,” Mr. McMurtry wrote in “Walter Benjamin at the Dairy Queen,” his essayistic memoir. Presented with that quote on Friday, he said he didn’t remember having had the thought. “A million books is a lot of books,” he said.

Neil Williamson, of Tampa, Fla., has been collecting for 25 years and estimated his personal library at 6,000 volumes. “Even if I walked away with nothing, I wanted to be here,” he said, echoing several others.

Or as Mr. McMurtry put it, “It’s become an event that’s transcended its literal purpose.”

Posted by pratanacoffeetalk at 6:08 AM