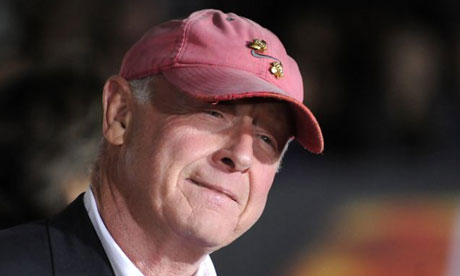 "There's nothing to indicate it is anything else at this time," said Lt. Joe Bale of the coroner's office.

Scott, 68, jumped from the bridge at about 12:30 p.m., Bale said. The bridge spans the Los Angeles Harbor, connecting San Pedro and Terminal Island.

A passerby who saw Scott jump from the bridge called 911, according to a statement released by the coroner's office late Sunday.

"The L.A. Port Police recovered the body from the water," the statement said.

The coroner's office declined to comment or confirm a Los Angeles Times report that authorities found contact information in Scott's car parked on the bridge, and later found a suicide note in his office.

Born Anthony D.L. Scott in North Shields, England, in 1944, Tony -- as he was known -- got his start as a teenager in front of the camera, starring in his older brother Ridley Scott's film "Boy and Bicycle."

In 1995, the two joined forces to create the production company, Scott Free Productions.

Simon Halls, a publicist who represents the Scott brothers, confirmed the death.

"The family asks for privacy during this time," Halls said.

Tony Scott became a household name in 1986 as director of the mega-hit "Top Gun," starring Tom Cruise and Kelly McGillis. He followed that up with the Eddie Murphy action movie, "Beverly Hills Cop II" in 1987.

Actor Michael Rapaport, who was directed by Scott in "True Romance," took to Twitter to praise the director. In one post, he said there hasn't been a day since the movie was released in 1993 that someone doesn't tell him how much they loved the movie.

Scott cemented his reputation for big-budget action films with 1990's "Revenge" starring Kevin Costner and "Days of Thunder" with Tom Cruise. In 1998, he directed "Enemy of the State" with Will Smith and Gene Hackman.

It was on the set of "Days of Thunder" where Scott met actress Donna Wilson, whom he married in 1994. They had twin sons.

Reaction to Scott's death poured out through Twitter, with directors, actors and fans mourning the news.
"Tony Scott as a friend and a mentor was irreplaceable. Tone, wherever you are, I love you man. RIP," director and producer Joe Carnahan said on Twitter.

Carnahan recounted how when his movie "The Grey" was finished, Scott called him to tell him he had seen it. He told Carnahan it was great and not to allow anybody to change anything in it.

"Tony always sent personal, handwritten notes & always drew a cartoon caricature of himself, smoking a cigar, with his hat colored in red," Carnahan said in a post.


Director and actor Adam Shankman said his heart stopped when he heard of the "tragic death" of one of "(our) most inspiring directors, Tony Scott."
"Rest in Peace Tony. U will be missed so...," he wrote in a post on Twitter.

"For me, it was the most challenging movie of my life, and the most dangerous because I'm shooting 90 percent of the movie on a train that is running between 50 and 70 mph," Scott told CNN at the time.

Scott was often seen sporting a frayed, faded red ball cap on the movie sets and at red carpet premieres.
The ball cap, Wolf said, was his trademark.

In 2002, the Scott brothers won an Emmy for the television movie "The Gathering Storm."

Scott also was nominated for the Emmy as a producer for the CBS drama "The Good Wife."

"So very, very sorry to hear of the death of Tony Scott," actress Martha Plimpton, who appeared in "The Good Wife," said via Twitter.

Among his last projects was serving as an executive producer on the TV miniseries, "Coma," which is due to air this year.

A BRIEF ABOUT TONY SCOTT

Distinct visual styles mark both siblings' films - Ridley Scott mastering the creation of entire worlds with such films as Gladiator, Blade Runner, Alien and this year's Prometheus, Tony Scott known for hyper-kinetic action and editing on such films as his most recent, the runaway train thriller Unstoppable, starring regular collaborator Denzel Washington.

Tony was the first of the Scott brothers to enjoy blockbuster success with Top Gun, starring Tom Cruise, the top-grossing film of 1986 at $176 million.

Scott teamed with Cruise again four years later on the hit Days of Thunder. He also had a sequel to Top Gun in development.

But Ridley Scott later managed more and bigger hits than his brother and earned a level of critical respect never achieved by Tony Scott.

Gladiator won the best-picture Academy Award for 2000 and earned Ridley Scott one of his three best-director nominations; Tony Scott never was in the running for an Oscar, and critics often slammed his movies for emphasizing style over substance.

The two brothers ran Scott Free Productions and were working jointly on a film called Killing Lincoln, based on the best seller by Bill O'Reilly.

Their company produced the CBS dramas NUMB3RS and The Good Wife as well as a 2011 documentary about the Battle of Gettysburg for the History Channel.

Besides Unstoppable, Scott worked with Washington on four other movies: Crimson Tide, Man on Fire,  Deja Vu and The Taking of Pelham 123.

Other Scott films include True Romance, written by Quentin Tarantino, The Fan, with Robert De Niro, and Enemy of the State, starring Will Smith.

Posted by pratanacoffeetalk at 11:43 PM