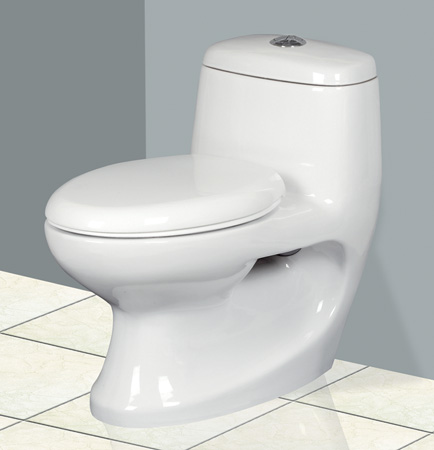 Bill Gates, as you've probably heard, wants to reinvent the toilet. The winner of his first Reinvent the Toilet Challenge was a team from the California Institute of Technology that designed a solar-powered toilet that generates hydrogen and electricity. This isn't just a curiosity. The Gates Foundation sees better toilets as key to fighting disease and improving lives; for business, what they represent is a huge potential market. I have come across many writings about entry
strategies and product offerings for emerging markets, but little that addressed the sheer sizes at stake. Toilets help illustrate just how gigantic the opportunities, and challenges, will be.

The largest markets will be seen around the axis of India and China, because both countries have huge populations, with a significant share still living in rural areas. India, for instance, expects to see some 350-400 million people becoming urban residents in the next three decades. That could mean demand for as many as 150 million new toilets.

The world demand and supply gap is daunting: the largest supplier of toilets is Roca of Barcelona, which sold 32.5 million of them in 2010. Kohler is a distant runner-up, with a yearly output of 20 million units, most of them unsuitable for low-income markets. Renovation and upgrading in the advanced economies probably accounts for about half of the production of toilets there; meaning that only about a quarter of the rest can be sold to emerging markets where, altogether, there are about 2.8 billion people without access to sanitarily acceptable toilet systems.

Will there be alternatives to building toilets for all? There are projects for community toilet facilities. That approach was popular back in Roman times, but the Western bathroom today is very much a private affair and is the one sold on films and shown in illustrated dictionaries. It certainly is the look that is catching on in emerging markets, as happened in Japan after the American occupation. Now Japan has an industry focused on high-end toilets, after having reconverted its ceramic-tile manufacturing to sanitary units, which command a better value for the same raw materials. A similar reconversion, from tiles to ceramic sinks and toilets, is currently taking place in China and India, while Italy, first in tile sales, and the United Arab Emirates, first in tile volume, have yet to adjust.

As the Gates project shows, there's surely much innovation to come. Water usage and toilet paper are still a waste. Currently available double flush technology has cut water usage per discharge by 67% since 1980, making it difficult to cut further with the current water-based system. Reduction in toilet paper use could come from sharing, as in the Seinfeld episode, but that is unlikely to become a common practice. Tissue out of recycled paper will make it into the bathroom first, but in the U.S., recycled-paper tissue still accounts for less than 2% of sales. Ceramics may eventually be replaced, but current recycled-glass toilet alternatives are no less energy intensive.

I have focused on the demand for home-toilets to come from emerging markets because this need, being closer to a quotidian Western experience, can help in understanding the size of the tectonic shift in geographical demand this, and associated industries, are beginning to experience.

Additional demand for new toilets, and derived demand for raw materials and energy, is only the tip of the housing demand iceberg coming from emerging markets. Think of the even less sexy bits like plumbing, roofing, flooring, walling, doors, lifts, soap, and disinfectants. Surely shantytown dwellers will initially not directly demand much of those, but over the span of not more than a decade the demand will be begin to materialize and will far outstrip the current demand coming from the advanced economies. Are you ready?


ALFREDO BEHRENS
Alfredo Behrens is professor of Global Leadership at Faculdade FIA de Administração e Negócios in São Paulo. His most recent book is Shooting Heroes and Rewarding Cowards: A Sure Path Towards Organizational Disaster. Follow him on Twitter at @0800Alfredo.
--------------------
http://blogs.hbr.org/cs/2012/08/the_coming_global_toilet_boom.html
http://img.diytrade.com/cdimg/484481/3231604/0/1169801647/ceramic_one-piece_toilet.jpg

Posted by pratanacoffeetalk at 10:34 AM