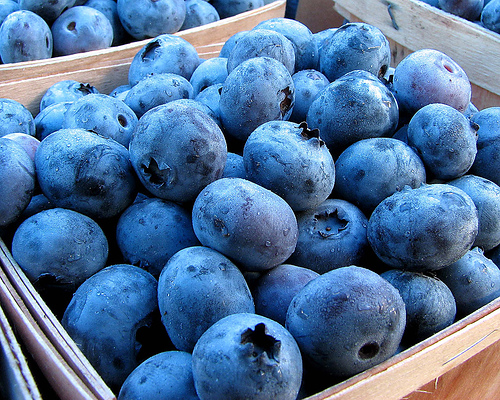 The health benefits of blueberries are now adding incentive to eating the delicious little taste treats. Whether you have them frozen or fresh, you get the same healthful results. Numerous studies show increasing data that these tiny morsels of fruit pack a nutritional wallop to provide cancer-fighting antioxidants, benefits to slow the aging process and provide an abundant amount of nutrients.

Just one cup of blueberries provides over 30 percent of your daily nutritional vitamin C requirement, over 20 percent of the manganese necessary and more than 7 percent of your daily need for vitamin E. More than that, it offers a vast amount of anthocyanidins, which are phytonutrients. These powerhouse antioxidants help reduce tissue damage caused by free radicals.

The pigment that gives the berries its color, the anthocyanins derived from the anthocyanidins, are flavonoids that help prevent tissue damage that causes varicose veins, heart disease, glaucoma and even aging. A group of mice fed the extract from blueberries that would equal a person eating a cup of the berries each day, performed better on tests for their memory and learning compared to the control group not given the supplement.

This has dramatic potential for the group approaching their senior years. Since the results seem to come from the extract blocking free radical damage to the brain cells, this could produce an answer to the cognitive dysfunctions associated with aging. Some early tests with humans indicate that a cup of blueberries each day might slow down the ravages of aging. The human studies showed the group that ate the blueberries out performed the control group by over five percent on motor skill tests. 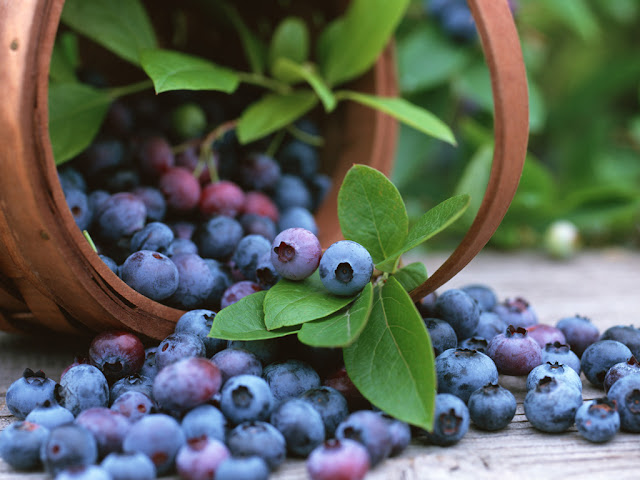 Studies at Ohio State University found that the anthocyanins in these and other fruits and vegetables helped diminish and even cure certain forms of cancer. Today there are several studies attempting to isolate the anthocyanins and create a pill. After all, you can't patent blueberries.

For several years, many nursing homes have turned to the practice of giving cranberry juice to patients prone to urinary tract infection. They found this dramatically reduced the incidence of the infection, due to the proanthocyanidins, which prevent bacteria from remaining on the lining of the urinary tract. These same proanthocyanidins are also in blueberries say researchers at Rutgers University in New Jersey.

The micronutrients of blueberries improve visual health, too. A study on over 110,000 people showed that just three servings of fruits and vegetables, particularly those high in vitamin C and E like blueberries reduced the development of macular degeneration. Other claims for visual health come from the cousin of the blueberry, the bilberry, which may contain the same elements as its relative. Extracts of the fruit have been part of the British Air Force pilots diet since WWII in an effort to prevent night blindness and has proven successful in many areas.

Blueberries are also important in the "keep America beautiful" program. One study with lab rats showed that powder made from crushed freeze dried blueberries helped reduce the belly fat which increases the risk of both diabetes and heart disease. It not only took away abdominal fat, making the mice candidates for modeling jobs, it lowered their triglycerides and gave them improved control of glucose and insulin sensitivity. The researchers led by E Mitchell Seymour from the University of Michigan's Research Laboratory for Cardioprotection believe the findings may prove worthy of further research for humans, particularly the overweight.

I do know that by making blueberries a regular part of my diet has helped me to lose over fifty pounds - mostly belly fat. Go blueberries!

The health benefits of blueberries continue to grow as modern science finds that cures for many ailments already existed before the advent of the first laboratory or drug companies. It's amazing when you consider that thousands of dollars of treatments often leave patients uncured and ill from the treatments themselves but those that come from Mother Nature, provide not only good health but a tasty treat besides.

Posted by pratanacoffeetalk at 12:28 PM