WHAT REALLY MAKES US FAT 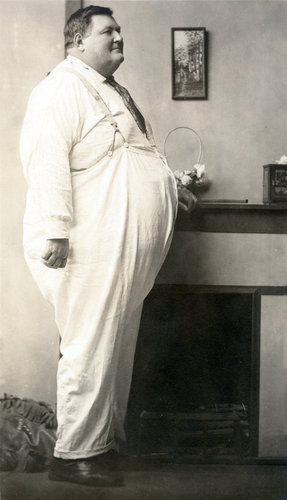 A CALORIE is a calorie. This truism has been the foundation of nutritional wisdom and our beliefs about obesity since the 1960s.

What it means is that a calorie of protein will generate the same energy when metabolized in a living organism as a calorie of fat or carbohydrate.

When talking about obesity or why we get fat, evoking the phrase “a calorie is a calorie” is almost invariably used to imply that what we eat is relatively unimportant. We get fat because we take in more calories than we expend; we get lean if we do the opposite. Anyone who tells you otherwise, by this logic, is trying to sell you something.

But not everyone buys this calorie argument, and the dispute erupted in full force again last week. The Journal of the American Medical
Association published the results of a clinical trial by Dr. David Ludwig of Boston Children’s Hospital and his collaborators. While the media tended to treat the study as another diet trial — what should we eat to maintain weight loss? — it spoke to a far more fundamental issue: What actually causes obesity? Why do we get fat in the first place? Too many calories? Or something else?

The calorie-is-a-calorie notion dates to 1878, when the great German nutritionist Max Rubner established what he called the isodynamic law.

It was applied to obesity in the early 1900s by another German — Carl Von Noorden, who was of two minds on the subject. One of his theories suggested that common obesity was all about calories in minus calories out; another, that it was about how the body partitions those calories, either for energy or into storage.

This has been the core of the controversy ever since, and it’s never gone away. If obesity is a fuel-partitioning problem — a fat-storage defect — then the trigger becomes not the quantity of food available but the quality. Now carbohydrates in the diet become the prime suspects, especially refined and easily digestible carbohydrates (foods that have what’s called a high glycemic index) and sugars.

UNTIL the 1960s, carbohydrates were indeed considered a likely suspect in obesity: “Every woman knows that carbohydrate is fattening,” as two British dietitians began a 1963 British Journal of Nutrition article.

The obvious mechanism: carbohydrates stimulate secretion of the hormone insulin, which works, among other things, to store fat in our fat cells. At the time, though, the conventional wisdom was beginning its shift: obesity was becoming an energy issue.

Carbohydrates, with less than half the calories per gram as fat, were beginning their official transformation into heart-healthy diet foods. One reason we’ve been told since to eat low-fat, carbohydrate-rich diets is this expectation that they’ll keep us thin.

What was done by Dr. Ludwig’s team has never been done before. First they took obese subjects and effectively semi-starved them until they’d lost 10 to 15 percent of their weight. Such weight-reduced subjects are particularly susceptible to gaining the weight back. Their energy expenditure drops precipitously and they burn fewer calories than people who naturally weigh the same. This means they have to continually fight their hunger just to maintain their weight loss. The belief is that weight loss causes “metabolic adaptations,” which make it almost inevitable that the weight will return. Dr. Ludwig’s team then measured how many calories these weight-reduced subjects expended daily, and that’s how many they fed them. But now the subjects were rotated through three very different diets, one month for each. They ate the same amount of calories on all three, equal to what they were expending after their weight loss, but the nutrient composition of the diets was very different.

One diet was low-fat and thus high in carbohydrates. This was the diet we’re all advised to eat: whole grains, fruits, vegetables, lean sources of protein. One diet had a low glycemic index: fewer carbohydrates in total, and those that were included were slow to be digested — from beans, non-starchy vegetables and other minimally processed sources. The third diet was Atkins, which is very low in carbohydrates and high in fat and protein.

The results were remarkable. Put most simply, the fewer carbohydrates consumed, the more energy these weight-reduced people expended. On the very low-carbohydrate Atkins diet, there was virtually no metabolic adaptation to the weight loss. These subjects expended, on average, only 100 fewer calories a day than they did at their full weights. Eight of the 21 subjects expended more than they did at their full weights — the opposite of the predicted metabolic compensation.

On the very low-carbohydrate diet, Dr. Ludwig’s subjects expended 300 more calories a day than they did on the low-fat diet and 150 calories more than on the low-glycemic-index diet. As Dr. Ludwig explained, when the subjects were eating low-fat diets, they’d have to add an hour of moderate-intensity physical activity each day to expend as much energy as they would effortlessly on the very-low-carb diet. And this while consuming the same amount of calories. If the physical activity made them hungrier — a likely assumption — maintaining weight on the low-fat, high-carb diet would be even harder.  Why does this speak to the very cause of obesity? One way to think about this is to consider weight-reduced subjects as “pre-obese.” They’re almost assuredly going to get fatter, and so they can be research stand-ins — perhaps the best we have — for those of us who are merely predisposed to get fat but haven’t done so yet and might take a few years or decades longer to do it.

If we think of Dr. Ludwig’s subjects as pre-obese, then the study tells us that the nutrient composition of the diet can trigger the predisposition to get fat, independent of the calories consumed. The fewer carbohydrates we eat, the more easily we remain lean. The more carbohydrates, the more difficult. In other words, carbohydrates are fattening, and obesity is a fat-storage defect. What matters, then, is the quantity and quality of carbohydrates we consume and their effect on insulin.

From this perspective, the trial suggests that among the bad decisions we can make to maintain our weight is exactly what the government and medical organizations like the American Heart Association have been telling us to do: eat low-fat, carbohydrate-rich diets, even if those diets include whole grains and fruits and vegetables.

A controversial conclusion? Absolutely, and Dr. Ludwig’s results are by no means ironclad. The diets should be fed for far longer than one month, something he hopes to do in a follow-up study. As in any science, these experiments should be replicated by independent investigators. We’ve been arguing about this for over a century. Let’s put it to rest with more good science. The public health implications are enormous.