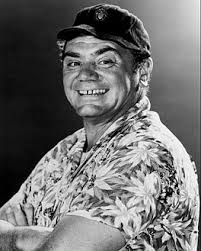 Ernest Borgnine, the Oscar-winning actor whose parts ranged from ominous heavies and humble everymen to the buffoonish skipper of a PT boat in the television series “McHale’s Navy,” has died. He was 95.

The burly, gap-toothed actor outlasted most leading men of his generation. He appeared in more than 110 films in his five- decade career, including “From
Here to Eternity,” “The Dirty Dozen,” “Marty,” and “The Poseidon Adventure,” and by his count died onscreen almost 30 times.

“I’ve been shot, stabbed, kicked, punched through barroom doors by Spencer Tracy and Gary Cooper, pushed in front of moving subway trains, devoured by rats and a giant mutated fish, blown up in spaceships, melted down into a Technicolor puddle, jumped into a snake pit, and I perished from thirst in the Sahara Desert,” he wrote in his 2008 memoir.

His role as a socially inept New York City butcher who courts a spinster schoolteacher in “Marty” (1955) earned him the Academy Award for best actor. The movie also won Oscars for best picture, best screenplay (for Paddy Chayefsky) and best directing (for Delbert Mann). New York Times reviewer Bosley Crowther praised Borgnine’s performance as “a beautiful blend of the crude and the strangely gentle and sensitive in a monosyllabic man.” “It’s much better to be a character actor and be working forever than it is to be a lead man and say, ‘My, the girls all love me,’” Borgnine said in a 2006 interview as part of the British Film Institute’s tribute to the U.S. actor.

Ermes Effron Borgnino was born on Jan. 24, 1917, in Hamden, Connecticut, to immigrants from Italy. His father, born Camillo Borgnino, worked at a brickyard and for a railroad.

His parents divorced when he was 2, so Borgnine lived with his mother, spending a few years in Italy before returning to Connecticut. After finishing high school, he spent six years in the Navy before serving in World War II, attaining the rank of chief petty officer.

To Broadway
At his mother’s suggestion, Borgnine turned to acting and went to drama school in Hartford, Connecticut. He graduated and attended Barter Theatre in Abingdon, Virginia, where actors performed in exchange for food from the local farmers in the audience. There he caught the eye of New York critics who saw him play a minor role in the Tennessee Williams play “The Glass Menagerie.” The reviews earned Borgnine parts on Broadway.

He moved to Los Angeles, where he got his break with a performance as the brutish Sergeant Fatso Judson in “From Here to Eternity” (1953), which won Frank Sinatra an Oscar for best supporting actor. In one scene, Borgnine’s character breaks a chair over the head of Sinatra’s character during a barroom brawl.

Parts in the Western “Johnny Guitar” (1954) and the mystery drama “Bad Day at Black Rock” (1955) followed, giving him a chance to act alongside Hollywood stars such as Tracy and Lee Marvin.

Borgnine beat out Sinatra, Tracy, James Dean and James Cagney for his best-actor Oscar in “Marty.” Being cast against type opened up new opportunities for Borgnine, though he more often played supporting roles than leading man.

Supporting Roles
“A fine-looking guy can be a louse, and a hard-looking man can be a real person,” Borgnine told the Times in 1955. “Anybody can play a rowdy role, but it takes something on the ball to play a good guy.”

Even after his Oscar, Borgnine didn’t gain widespread recognition until he turned to television work in the 1960s.

His initial reluctance to accept the lead role in “McHale’s Navy” faded after a delivery boy said he had no idea who Borgnine was. The actor quickly realized that television reached more people.

The black-and-white sitcom, which ran from 1962 to 1966, was “a smash beyond all our expectations,” Borgnine said.

Actor Tim Conway, as Ensign Parker, provided the main comedic support for Borgnine while the Navy crew bumbled its way to military success, often winning praise from the top brass. Joe Flynn added to the farce as Captain Binghamton, who was continually frustrated in his efforts to discipline McHale’s team of schemers and con men.

Five Marriages
“The Dirty Dozen” (1967) was a major box-office success, as Borgnine combined with Marvin, Charles Bronson and American football star Jim Brown to portray a commando mission on a French chateau as D-Day approached.

He appeared in the original feature film “The Poseidon Adventure” (1972) as a surviving passenger on a capsized cruise ship, and in the TV series “Airwolf” (1984-1986) as a veteran helicopter pilot.

Borgnine married five times, including once to Broadway actress Ethel Merman for only 32 days, and had three children.