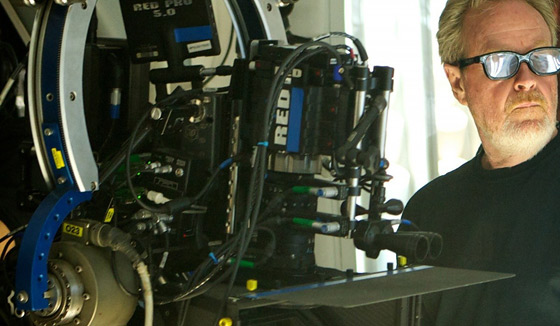 "All I was doing was turning the chapter, not opening the door." There is nothing like an interview with the master himself, legendary director Ridley Scott. I was nervous going in, but did my best to come up with some good questions, and fired away. Last week I was invited to sit down for a solid 20 minutes with Ridley Scott, director of Prometheus, who's out doing interviews for the film. The topic on my mind was one that I had been curious about for a while - why return to sci-fi now? Not only did we talk about that, but we talked about science fiction in general, his opinion on 3D and the R rating. I've split the full video into two.


It's still unreal to even think that I just came from an interview with Ridley Scott, the man behind Gladiator, Blade Runner, Alien, American Gangster, some of my all-time favorites. Honestly, even 20 minutes wasn't enough, as I barely got through a few of my questions and I felt like we could've kept talking for hours. I just wanted to hear what he had to say about various elements of Prometheus, and he even drops a few hints about what he's doing with the new Blade Runner movie part of the way through the second video. In the start of the first one, he was already talking about the global film marketplace, and we continue from there...

Both of these were shot on my Flip, apologies for the framing. They're mostly spoiler free. A big Thank you to Ridley Scott, Katherine Rowe and 20th Century Fox for this incredible opportunity, I am very lucky and humbled to even be able to speak with him. Of course, I wish I had even more time. We covered as many of my questions as I could, and I enjoyed hearing his answers. I wanted to ask him about other projects, more about his involvement in the viral marketing, as well as visual effects; hopefully in a future interview I'll have time to cover more of this. Prometheus is undeniably a visually spectacular and engaging movie, and I think that's due in large part to Ridley and the vision he brought to it. Happy to talk with him about it.

Ridley Scott's Prometheus, his first science fiction since Blade Runner in 1982, finally arrives in US theaters on June 8th, this weekend. It's definitely worth seeing in theaters even in 3D. Once you see it, Sound Off!

by Alex Billington
----------
http://www.firstshowing.net/2012/interview-ridley-scott-on-sci-fi-hollywood-3d/
Posted by pratanacoffeetalk at 1:59 PM