MOURN IN THE FUNERAL OF ROBIN GIBB

The sole surviving member of the Bee Gees paid tribute to his brother and bandmate Robin Gibb at his funeral on Friday (8 June 2012), mourning the loss of his "magnificent mind and his beautiful heart".

Barry Gibb said that legendary singer and songwriter Robin had finally been reunited with his twin brother and fellow Bee Gee Maurice -- who died in 2003 -- when he lost his battle with cancer on May 20, aged 62.

Hundreds of Bee Gees fans gathered outside as friends and family, many in tears, paid their last respects at the local church in Robin Gibb's home town of Thame, Oxfordshire, to the sound of some of the band's most famous songs.

"Life is too short. In Robin's case, absolutely too short," Barry told mourners in a eulogy at St Mary's Church.

"We should have had 20 (more) years, 30 years of his magnificent mind and his beautiful heart."

He said that Robin and his brother Maurice were "both beautiful".

"And they're finally together. I think the greatest pain for Robin in the past 10 years was losing his twin brother, and I think it did all kinds of things to him. And now they're together."

Barry added: "The three of us have seen a lot of crowds but I've never seen as much love in one crowd as I'm looking at today -- for Rob, for the music."

As the Bee Gees, Barry, Maurice and Robin helped turn disco into a global phenomenon in the 1970s with hits such as "How Deep Is Your Love", "Stayin' Alive", and "Night Fever".

But their elderly mother Barbara, who was at the funeral, has outlived all but Barry, after the death of a fourth brother, Andy, from cocaine addiction in 1988. 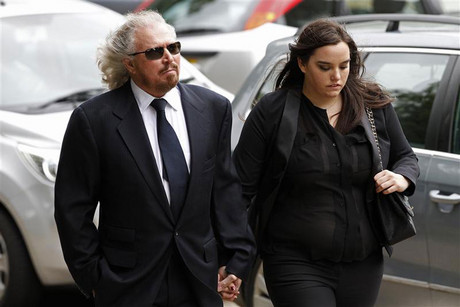 Fans and locals lined the streets as Gibb's white, glass-sided hearse, covered with red roses and accompanied by a bagpiper, was drawn through the town from his home of 19 years by four black horses plumed with black feathers.

The crowd applauded as the white coffin, draped with the flag of his birthplace the Isle of Man, was carried up the aisle inside the church to the sound of the Bee Gees' hit "How Deep Is Your Love".

Robin's wife Dwina and their son Robin-John, known as RJ, plus his daughter Melissa and son Spencer from his previous marriage, led the black-clad mourners at the private funeral to be followed by a memorial service later in the year.

Lyricist Tim Rice and entertainer Uri Geller were also among the guests.

Dwina read a poem called "My Songbird Has Flown", and mourners heard a recording of "Don't Cry Alone" from Gibb's Titanic Requiem, first performed weeks before his death.

Son RJ said of his father: "I will love you always and will take comfort that you are always only a song away, as I will surely hear your voice wherever I go." 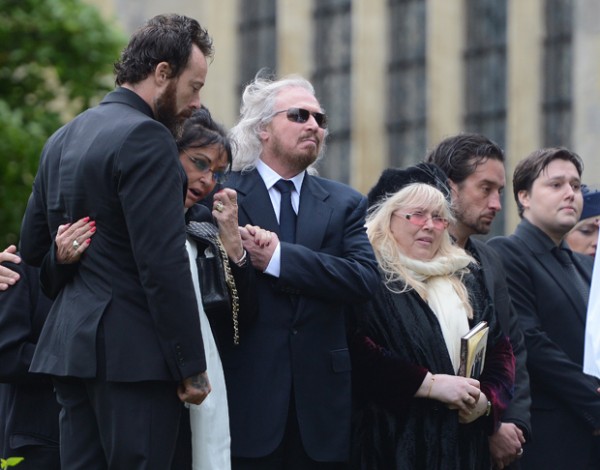 The mourners left the church to the sound of the Bee Gees' classic "I Started A Joke", which includes the line "I finally died, which started the whole world living".

Robin's three-year-old daughter Snow and her mother, a former housekeeper of his, were absent from the service.

Barry threw a red rose onto his brother's casket at his burial in the churchyard after the service.

He had hinted at tensions with Robin before his death, saying: "Even right up to the end we found conflict with each other, which now means nothing. It just means nothing. If there's conflict in your lives -- get rid of it."

Originally from the Isle of Man in the Irish Sea, the Gibb brothers grew up in Manchester and Australia, and were singing in public from childhood.

The trio's sharp songwriting and immaculate harmonies helped them notch up record sales of more than 200 million, while Robin wrote hit songs for artists including Barbra Streisand, Dionne Warwick and Diana Ross.

Uniformed cadets from 594 Thame Squadron of the Air Training Corps also lined up outside the church Friday to honour Gibb's campaign for a memorial to members of Royal Air Force Bomber Command who were killed in action.

The stone monument to Bomber Command, a key element of Britain's forces in World War II, has been completed in Hyde Park in London but Gibb did not survive to see it unveiled later this month.