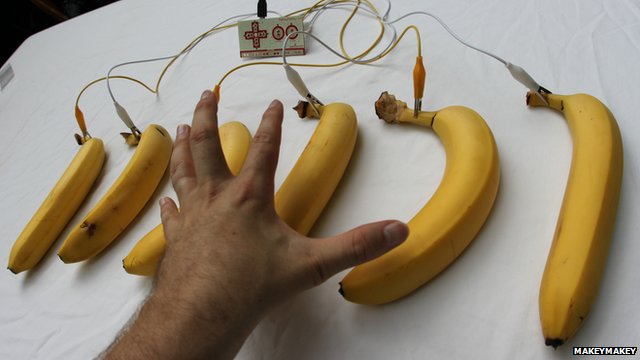 Two students at the Massachusetts Institute of Technology (MIT) have managed to develop a banana piano.


Jay Silver and Eric Rosenbaum, both 32, were looking for a way of turning everyday objects into touchpads.

They have developed a kit called MakeyMakey, that can turn fruit, animals and even humans into keyboards.

Mr Rosenbaum told the BBC the idea behind the kit was to enable people to "see the world around them as a construction kit."

The basic kit contains a USB cable and a bespoke circuit board with alligator clips attached to it. The circuit board is programmed to replace a standard computer keyboard.

Once the board has been connected to a PC or laptop via USB, the alligator clips can be linked to any object that conducts electricity. 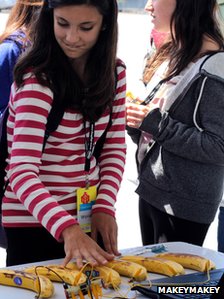 When asked about safety concerns, Mr Rosenbaum said the amount of current used in the equipment was very small and not detectable when the kit was connected to the human body or animals.

He said fuses had been incorporated into the board as well as the USB port to ensure safety.

An animal-rights group contacted by the BBC did not express concerns.

Mr Silver said the possibilities were unlimited, from connecting a broccoli head to run Skype to creating an interactive music floor. Even his cat became part of the experiment.

"Cats are conductive on their foot pads, their ears, their nose, and their mouth. But their fur is not conductive."

According to Mr Rosenbaum they have managed to turn two of his friends into sound machines, a beach-ball into a game controller and have used a cup of milk to make music.

More than a gimmick

But both students insist the kit is more than just a gimmick.

Mr Silver told the BBC that dozens of people had contacted them, wanting to customise the Makey board for people who cannot use a conventional keyboard.

"A father is currently turning it into a computer interface for his son who is suffering from cerebral palsy. We call this Hackcess."

Mr Silver and Mr Rosenbaum came up with the idea on a road trip in California two years ago.

Mr Rosenbaum, a self-taught programmer with an academic background in education, said the pair wanted to change the way people relate to technology.

"It's easy for kids to get turned off by science and maths, because of the way it is taught. We wanted to make it easier for people to use engineering as a tool to fuel creativity."

Around 150 beta-versions of the kit have been made available to test-users and AnnMarie Thomas, based in Minneapolis, was among the first to try it.

She says even her four-year-old daughter has managed to connect the kit without any help.

"My kids love it. My daughter was able to plug it in and set it up. She has tried tin foil and playdough and has even managed to connect herself to the kit."

Ms Thomas, a former professor of engineering, trains future engineering teachers and thinks the kit has a lot of potential for use in schools.

"It is a great way to engage kids with science and technology," she said. "It helped my daughter understand how circuits work and how to ground herself."

The students were looking to raise $25,000 (£16,000) to produce more kits, and launched the project on Kickstarter, a crowdsource funding site for entrepreneurs.

"We hope to develop a community of people using MaKeyMaKey and sharing their ideas and inventions with each other. We have lots of ideas for extensions and add-ons."

The project has already received more than $440,000 in funding.

According to Mr Rosenbaum, they are receiving a huge number of inquiries on a daily basis, including offers for paid services or collaborations with companies.