THE MYSTERY OF THE "RED SNAKE" WALL 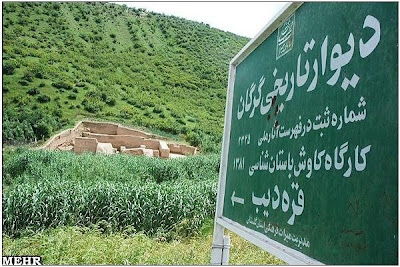 New discoveries unearthed at an ancient frontier wall in Iran provide compelling evidence that the Persians matched the Romans for military might and engineering prowess.

The 'Great Wall of Gorgan'in north-eastern Iran, a barrier of awesome scale and sophistication, including over 30 military forts, an aqueduct, and water channels along its route, is being explored by an international team of archaeologists from Iran and the Universities of Edinburgh and Durham. This vast Wall-also known as the 'Red Snake'-is more than 1000 years older than the Great Wall of China, and longer than Hadrian's Wall and the Antonine Wall put together.


Until recently, nobody knew who had built the Wall. Theories ranged from Alexander the Great, in the 4th century BC, to the Persian king Khusrau I in the 6th century AD. Most scholars favoured a 2nd or 1st century BC construction. Scientific dating has now shown that the Wall was built in the 5th, or possibly, 6th century AD, by the Sasanian Persians. This Persian dynasty has created one of the most powerful empires in the ancient world, centred on Iran, and stretching from modern Iraq to southern Russia, Central Asia and Pakistan.

Modern survey techniques and satellite images have revealed that the forts were densely occupied with military style barrack blocks. Numerous finds discovered during the latest excavations indicate that the frontier bustled with life. Researchers estimate that some 30,000 soldiers could have been stationed at this Wall alone. It is thought that the 'Red Snake'was a defence system against the White Huns, who lived in Central Asia.

Eberhard Sauer, of the University of Edinburgh's School of History, Classics and Archaeology, said: “Our project challenges the traditional Euro-centric world view. At the time, when the Western Roman Empire was collapsing and even the Eastern Roman Empire was under great external pressure, the Sasanian Persian Empire mustered the manpower to build and garrison a monument of greater scale than anything comparable in the west. The Persians seem to match, or more than match, their late Roman rivals in army strength, organisational skills, engineering and water management.”

The research is published in the new edition of Current World Archaeology and the periodical Iran, Journal of the British Institute of Persian Studies 45.