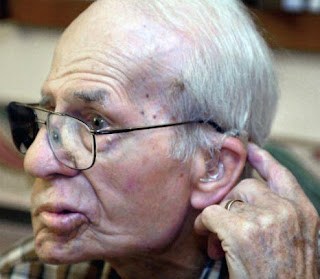 William Lawlis Pace was just 8 years old when a bullet became lodged in his head. His older brother, not realizing their father's .22 caliber rifle was loaded, accidentally shot him in the face at the family's Texas farm in 1917.

But while Pace was left nearly blind in one eye and lost hearing in one ear, he lived another 94-plus years after the shooting, making him a world record-holder in the quirky, but official, Guinness category of "longest time to live with a bullet in the head."

Pace died in his sleep Monday at a nursing home in Turlock, Calif., The Modesto Bee reported Thursday. He was 103.

While the injury brought him fame, it never defined him, his son, Theron Pace, told The Wichita Falls, Texas, Times Record News, in 2009.

“During the entire time, he had no pain,” Theron said. “He didn’t lose consciousness. They decided they couldn’t do anything for him because the bullet was so close to the brain.”

“His parents did a great job of not letting it affect his life,” Pace said a few years before his father's death. “He even played sports; he was a catcher in baseball. If you saw him now, you think maybe he had a stroke. His mouth was pulled to one side and he had poor use of his right eye.”

He got married and had kids, grandkids, and great-grandkids. His wife, Onetia, died in 2004 after 71 years of marriage, The Modesto Bee reported.

Together, Pace and Onetia traveled the world, The Times Record said, going to Australia, Egypt, Hong Kong, and Tanzania, among other countries.

Pace went to college for a couple of years, his son told The Times Record, but then quit at doctor's urging to save his "good eye," and followed his father's path, becoming a farmer. Years later, he worked as a cemetery caretaker. Despite his injury, he was never considered disabled, according to his son.

Other than son Theron, Pace is survived by a second son, Bill, a brother, and his grandchildren and great-grandchildren. Another child died shortly after birth.

In 2010, The Modesto Bee asked Pace what the biggest surprise in his 100-plus years of life had been.

"Improvements in living," he said. "When I was born, there were no tractors, no milking machines."

Pace will be buried Saturday morning at the North Hilmar Cemetery in California, one of the cemeteries he worked at as a caretaker, according to his obituary in the Turlock Journal.

"His sense of humor and kindness was experienced by all who knew him," says the obituary.