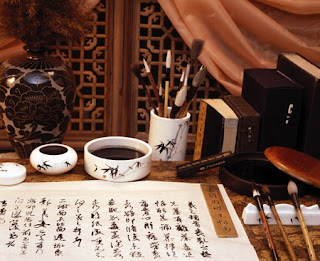 When one goes to Obaku temple in Kyoto he sees carved over the gate the words "The First Principle." The letters are unusually large, and those who appreciate calligraphy always admire them as being a masterpiece. They were drawn by Kosen two hundred years ago.

When the master drew them he did so on paper, from which workmen made the larger carving in wood. As Kosen sketched the letters a bold pupil was with him who had made several gallons of ink for the calligraphy and who never failed to criticize his master's work.


"That is not good," he told Kosen after the first effort.

"Poor. Worse than before," pronounced the pupil.

Kosen patiently wrote one sheet after another until eighty-four First Principles had been accumulated, still without the approval of the pupil.

Then, when the young man stepped outside for a few moments, Kosen thought: "Now is my chance to escape his keen eye," and he wrote hurriedly, with a mind free from distraction. "The First Principle."

"A masterpiece," pronounced the pupil.