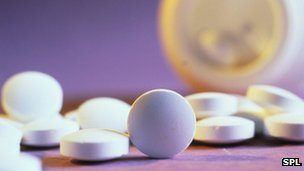 People who take calcium supplements could be increasing their risk of having a heart attack, according to researchers in Germany.

Calcium is often taken by older people to strengthen bones and prevent fractures.

But the study, published in the journal Heart, said the supplements "should be taken with caution".


Experts say promoting a balanced diet including calcium would be a better strategy.

The researchers at the German Cancer Research Centre, in Heidelberg, followed 23,980 people for more than a decade.

They compared the number of heart attacks in people who were taking calcium supplements with those who did not.

There were 851 heart attacks among the 15,959 people who did not take any supplements at all. However, people taking calcium supplements were 86% more likely to have had a heart attack during the study.

The researchers said that heart attacks "might be substantially increased by taking calcium supplements" and that they "should be taken with caution".

Dr Carrie Ruxton, from The Health Supplements Information Service, said: "Osteoporosis is a real issue for women and it is irresponsible for scientists to advise that women cut out calcium supplements on the basis of one flawed survey, particularly when the link between calcium, vitamin D and bone health is endorsed by the European Food Safety Authority."

The British Heart Foundation (BHF) said patients prescribed the supplements should keep taking their medication, but should also speak to their doctor if they were concerned.

Natasha Stewart, a senior cardiac nurse with the BHF, said: "This research indicates that there may be an increased risk of having a heart attack for people who take calcium supplements.

"However, this does not mean that these supplements cause heart attacks.

"Further research is needed to shed light on the relationship between calcium supplements and heart health. We need to determine whether the potential risks of the supplements outweigh the benefits calcium can give sufferers of conditions such as osteoporosis."

Ian Reid and Mark Bolland, researchers at the University of Auckland in New Zealand, said: "The evidence is also becoming steadily stronger that it is not safe, nor is it particularly effective.

"Therefore, the administration of this micro nutrient should not be encouraged; rather people should be advised to obtain their calcium intake from an appropriately balanced diet.

"We should return to seeing calcium as an important component of a balanced diet and not as a low cost panacea to the universal problem of postmenopausal bone loss."

A spokeswoman for the UK's Department of Health said it would consider the study carefully once the complete article had been published.

"The majority of people do not need to take a calcium supplement," she said.

"A healthy balanced diet will provide all the nutrients, including calcium, that they need. Good sources of calcium include milk and dairy foods, fortified dairy food alternatives, e.g. soya drink, and green leafy vegetables."