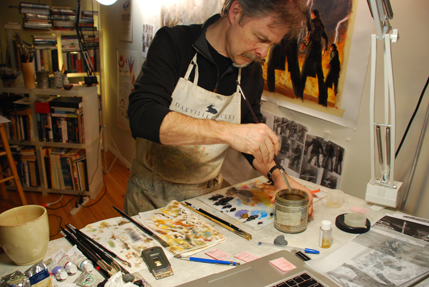 Lord of Chaos, volume six of Robert Jordan’s The Wheel of Time, will be available in ebook form March 16. In celebration of Jordan’s work, we have commissioned fourteen artists to interpret one of the Wheel of Time books in their own style. (Previous editions can be seen here. The first five ebooks can be purchased here.) For Lord of Chaos we present a signature battle of the series, Dumai’s Wells, as portrayed by Greg Manchess, in this singular “sliding” cover.

Before we get to our regularly scheduled behind-the-scenes process post, enjoy this time lapse video of the painting from beginning to end. (And note how, about half-way through, Greg learns to dodge the camera shutter firing every 15 seconds.)

Now, back to the beginning.

When the repackage project was a mere gleam in our eyes, I had a dream of being able to map out the entire series before we started commissioning the paintings. It was a good dream. And then I woke up and suddenly we were off and running with the first covers due fairly quickly. I’m sure there will be issues I wish we could readdress when all is said and done, but, in return it’s become a much more collaborative process than I could have imagined—and that has made the project twice as fun. Not only have I been getting input from the editor and usual in-house peoples but I have also gotten to know and get advice from Jason Denzel of Dragonmount, Leigh Butler of our own re-read project, and the Wheel of Time fan community.

All of which is the long way of saying: by the time we got to the third book I called Jason Denzel in a panic and said something to the effect of, “Dude, I need a scene with some action. Where should I look?” He gave me a long list of scenes from a number of the books but made it clear that, above all else, Dumai’s Wells had to be seen. Jason wrote,

Time after time it has been referred to by a variety of fans as one of the most exciting and intense chapters in the series. In the grand story arc of the series, it’s the central event that has perhaps the most significant impact for everything which follows after. With the artistic success of the previous ebook covers from Tor, I really wanted to see somebody bring forth and capture the chaotic destruction of Dumai’s Wells.

As I read the chapter I realized we had a sequence with thousands of warriors. There aren’t many artists I can turn to when I need a scene with more than two or three figures, but Greg Manchess’ work on Conan and various National Geographic assignments proved that he could handle the epic scale of the battle while keeping the movement loose and believable.

As we talked about the project ,we instantly regretted that our series template only gave us square frame to work with. While there was no getting around that for the official cover, Greg couldn’t resist diving in and tripling the proportions to include more of the action, ultimately creating a 21"x 72" painting. Greg says,

I told Irene that I was offering to do a grander, wider scene so that the viewer could explore the battle. It would stretch far enough to break the borders of the square, but to compensate, I composed it so that we could pick a ‘sweet spot’ to place on the cover. I let that spot dictate the broader POV.

As I stretched the scene, stage left, I found myself able to include more of what was happening in the story. I wanted to give a sense of distance to the landscape, while bringing figures forward enough that they’re almost on top of you. But the closer the figure, the more they block. And explosions take up a lot of real estate in a painting.

I had to pick the moment carefully. Depict a moment too far in advance of the mayhem and it weakens the excitement. Too far after the initial firestorm and I’d be depicting heaps of charred meat. I chose the moment just before the detonations went rending through the ranks completely. The wave is just starting to sweep over the Aiel, but as timing isn’t quite so precise, I depicted the flames cresting quickly from right to left, allowing the viewer “time” to see what was about to come. Utter flaming chaos.

We knew we wanted to focus on the Asha’man and the Aiel. In fact, at first we didn’t see any of our core characters. I did, however, request to see some wolves (because, hey, wolves) and once we saw wolves it made sense to add Perrin, and if we’re going to show Perrin we should show Loial as well.... I’m glad we added these characters. Although they are “second reads” in the painting, they add mini-dramas within the battle and reinforce the idea that such fights, no matter how large in scale, are fought by individuals. Greg found inspiration along those lines:

Although I was unfamiliar with the scenes and characters, I enjoyed doing the research necessary to get up to speed. My appreciation grew for Jordan’s work when I came across this quote from The Shadow Rising, explaining the Aiel tradition of veiling themselves before they kill: “Hide your face from me, stranger. I had a son, once, with a face like that. I do not wish to see it on a killer.”

While it’s fun to get caught up in the fantasy of a big battle, Jordan does not let us lose site of the bitter consequences of warfare. This allowed me to gain another perspective on the Aiel’s history, and that affects how the characters look.
-----------
http://www.tor.com/blogs/2010/03/lord-of-chaos-ebook-cover-by-greg-manchess
Posted by pratanacoffeetalk at 11:45 AM

Email ThisBlogThis!Share to TwitterShare to FacebookShare to Pinterest
Labels: Art