JOSEPH KONY WILL BE ARRESTED THIS YEAR 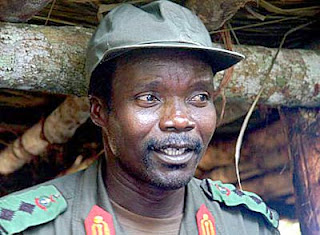 The prosecutor of the International Criminal Court says he has “no doubt” that fugitive African warlord Joseph Kony will be arrested this year because the international spotlight has helped boost the hunt for the Lord’s Resistance Army leader.

Luis Moreno-Ocampo said the fact that 100 million people watched the first video about Kony’s crimes in just six days showed that “the world today understands that justice has to be done” — and he expressed hope that the world will put a spotlight on other fugitives including Sudan’s president and a Congolese army general to help bring them before the court.


“Twenty years ago, no one was talking about justice,” he said in an interview with the Associated Press. “Now it’s a new thing.”

There are now 121 countries that are parties to the International Criminal Court, or ICC, but Moreno-Ocampo said even countries that are not parties, like the United States, Russia, China and India, have supported referrals to the permanent war crimes tribunal — and the U.S. is supporting the collection of evidence for possible future prosecutions of crimes in the Syria conflict.

“We are moving to a new world,” he said.

Moreno-Ocampo cited three key decisions in the ongoing hunt for Kony — the Ugandan government’s renewed commitment of troops, the Central African Republic giving a green light for Ugandan soldiers to operate there, and U.S. President Barack Obama’s dispatch of 100 U.S. military advisers — mostly Army Special Forces — to help the Ugandans with logistics including helicopters and intelligence.

Thousands of people have been killed since the Lord’s Resistance Army took up arms in 1986 in northern Uganda. The rebels abducted thousands of children and forced them to become fighters or sex slaves and were notorious for mutilating victims by cutting off their tongues and lips.

The ICC, based in The Hague, Netherlands, issued arrest warrants for Kony and four of his senior commanders in July 2005. Kony is charged with 12 counts of crimes against humanity and 21 of war crimes, including murder, rape, mutilation and the forced enlistment of child soldiers. Three of Kony’s top commanders are also wanted by the ICC for war crimes and crimes against humanity.

Moreno-Ocampo said that all the key institutions are behind the search for Kony — the ICC, the African Union and the U.N. Security Council — as well as the neighboring countries and Ugandan and U.S. troops.

“But now we have the citizens of the world pushing for that, and that is helping a lot,” he said. “It will be the end of the Joseph Kony crimes.”

“I think this year Kony will be arrested. I have no doubt — no doubt,” Moreno-Ocampo said in the interview Wednesday. “It’s a matter of putting enough resources and energy, and I think now we have it.”

He stressed that all of the court’s outstanding arrest warrants should be implemented.

“Not implementing the arrest warrants means that people are killed and women are raped,” Moreno-Ocampo said. “It’s not just a legal decision. It has enormous implications in terms of life.”

The ICC also has accused Sudan’s President Omar al-Bashir for orchestrating genocide, crimes against humanity and war crimes in Darfur. Former Sudanese Cabinet minister Ahmed Haroun, now the governor of South Kordofan state; Abdelrahim Mohamed Hussein, the former interior minister and special representative in Darfur who is now defense minister; and Janjaweed militia leader Ali Kushayeb are all accused of war crimes and crimes against humanity in the Darfur conflict, which has dropped out of the headlines.

Congo has also refused to hand over former rebel commander Bosco Ntaganda, who now holds the rank of general in the country’s army.

Posted by pratanacoffeetalk at 8:20 AM