Woolrich, a 182-year-old clothing company, describes its new chino pants as an elegant and sturdy fashion statement, with a clean profile and fabric that provides comfort and flexibility.

And they are great for hiding a handgun.

The company has added a second pocket behind the traditional front pocket for a weapon. Or, for those who prefer to pack their gun in a holster, it can be tucked inside the stretchable waistband. The back pockets are also designed to help hide accessories, like a knife and a flashlight.


The chinos, which cost $65, are not for commandos, but rather, the company says, for the fashion-aware gun owner. And Woolrich has competition. Several clothing companies are following suit, building businesses around the sharp rise in people with permits to carry concealed weapons.

Their ranks swelled to around seven million last year from five million in 2008, partly because of changes to state laws on concealed handguns.

Shawn Thompson, 35, who works at an auto dealership in eastern Kentucky, bought two shirts last month from the Woolrich Elite Concealed Carry line. Both, he wrote on his blog, are a step up from more rugged gear.

“Most of the clothes I used in the past to hide my sidearm looked pretty sloppy and had my girlfriend complaining about my looks,” he wrote, adding in an interview, “I’m not James Bond or nothing, but these look pretty nice.”

The shirt has a barely discernible side slit with Velcro through which, he said, he can yank his Colt 1911 from his waistband holster. Depending on circumstances and mood, he might also carry a folding knife and, at night, a flashlight in a pair of Woolrich chinos his girlfriend bought for him.

Carriers of concealed guns say the new options are a departure from the law enforcement and military look, known as “tactical,” long favored by gun owners.

The latest styles, by contrast, are called “concealed carry” or “covert fashion.”

“What we’ve tried to do is create a collection of garments that allows the end user to have stylish lifestyle apparel but have features in the garment that enable them to carry a weapon and draw the weapon quickly,” said David Hagler, a vice president at 5.11 Tactical, who was lured from Nike to work at 5.11, one of the biggest makers of clothing for soldiers and police officers. 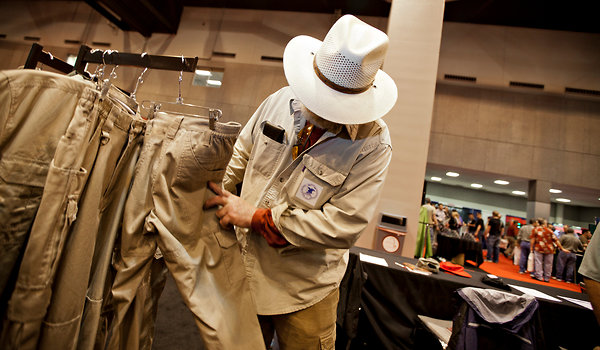 The company’s growing concealed-carry line includes a lightweight water-resistant vest coming this fall — the sort of vest that is standard and trendy at any mainstream outdoor shop but has strategic pockets for guns. It also includes a stealth compartment in front so the wearer can appear to be warming his hands while actually gripping a pistol in a waistband holster.

Other companies are rushing to meet the demand for concealed-carry clothing. Under Armour, best known for its sports and action gear, will be adding a jacket and a plaid shirt with Velcro pockets for easy gun access.

Kevin Eskridge, senior director for outdoor product and design at the company, said the company had seen demand double in the last year for such clothing from traditional outdoor and sporting goods stores, like Dick’s Sporting Goods and Cabela’s.

Mr. Eskridge said the Under Armour apparel was catching on because of fashion but also because of its features, including moisture-wicking fabric.

“Others are making shirts with gun access but using regular cotton,” he said. With his company’s fabrics, “there’s no stink factor,” he said. And if gun owners do not use fabrics that wick away moisture, “You’ll literally rust out,” he added.

Gun experts suggest that there are many reasons for the growth in the number of people with concealed-carry permits. They say it is partly due to a changing political and economic climate — gun owners are professing to want a feeling of control — and state laws certainly have made a difference.

After a campaign by gun rights advocates, 37 states now have “shall issue” statutes that require them to provide concealed-carry permits if an applicant meets legal requirements, like not being a felon. (A handful of other states allow the concealed carrying of handguns without a permit). By contrast, in 1984 only 8 states had such statutes, and 15 did not allow handgun carrying at all, said John Lott, a researcher of gun culture who has held teaching or research posts at a number of universities, including the University of Chicago.

Only one state, Illinois, now forbids handgun carrying in any form, but the legislature is considering a change.

A majority of states have long allowed the open carrying of handguns, said Mr. Lott, who also provided the data on gun permits. But the reality, said Mr. Lott and other gun experts, is that people do not want to show others that they are carrying a weapon or invite sharp questioning from the police.

The clothing lines address a perceived need in the concealed-carry subculture. Gun owners say they want to practice “maximum uncertainty,” meaning that if a gun is sufficiently concealed, a potential criminal will be unsure whether to attack. Gun experts say the research is inconclusive about whether such tactics reduce crime. Regardless, the clothing makers are jumping on the line of thinking.

“When someone walks down the street in a button-down and khakis, the bad guy gets a glimmer of fear, wondering: are they packing or not?” said Allen Forkner, a spokesman for Woolrich, which started its concealed-carry line in 2010 with three shirts.

The company has since added new patterns for shirts, pants and the Elite Discreet Carry Twill jacket, in dark shale gray and dark wheat tan. In addition to its gun-friendly pockets, the jacket has a channel cut through the back that the company says can be used to store plastic handcuffs.

Not everyone who carries a concealed gun is a fan of the new fashion. Howard Walter, 61, a salesman at Wade’s Eastside Guns in Bellevue, Wash., said he preferred to carry his Colt — and a couple of knives and two extra magazines — in a durable pair of work pants.

“They don’t shout ‘gun,’ they shout ‘average guy in the street,’ ” said Mr. Walter, who years ago worked in sales at Nordstrom. But really, he said, the most important thing in picking clothing is to choose something that works for the weapon. “They should dress for the gun,” he said he advised his customers. “Not for the fashion.”

Posted by pratanacoffeetalk at 9:50 AM