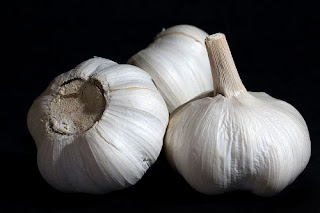 Garlic is a pungent herb and one of nature's best anti-biotics. Due to the powerful sulfur containing nutrients and immune stimulators within garlic, it is classified as a superfood herb. Consumption of garlic daily may be one of the best defense's against infection and inflammatory based disease.


Garlic has been used by many cultures throughout the history of mankind as a medicinal tool. The Sumerians and other groups around the Mediterranean region had a great reverence for its ability to fight infection. An Egyptian writing dating back to 1500 BC discusses the use of garlic for over 22 common health challenges. These same Egyptians fed a heavy garlic diet to their slaves to increase their strength as they built the great pyramids.

Garlic grows all year around in mild climates and forms very hardy stalks. The strong smell repels most insects, rodents and other animals that would potentially be predators. The largest supplier of garlic is China while in the US the "garlic capital of the world" is found in California. Garlic is typically grown without the use of toxic chemicals and always tests out for very low levels of pesticides and herbicides.

Garlic is one of nature's most powerful immune boosting secrets. Garlic contains over 100 biologically active components including alliin, allicin, alliinase and unique sulfur compounds. When garlic is crushed or chewed it forces the allin and allinase enzyme together and causes a chemical reaction to produce allicin. Allicin along with sulfur based compounds act as powerful antibiotic, anti-viral, and anti-fungal agents that have an incredible immune stimulating effect. Additionally, garlic is also used to lower blood pressure, cholesterol, and help prevent/reverse cancer.

Researchers have found garlic to be more powerful at destroying pathogenic bacteria than the popular anti-biotics penicillin and tetracycline. It is also very effective against viruses and yeasts like Candida. Garlic is also very potent at destroying tumor cells in the stomach, colon, breast and prostate among other regions. The sulfur compounds are also effective at detoxifying heavy metals such as mercury, lead, & aluminum.

The benefits of garlic can be enhanced by letting it sit for a few minutes directly after chopping. Most people chop or slice garlic and then immediately cook it or put it in an acid based solution such as lemon juice. Both of these modes of preparation reduce the allinase enzyme and decrease the availability of the sulfur compounds.

Garlic is known for its very strong odor and has even been called the "stinking rose." Large quantities of garlic consumption have been known to cause an unpleasant body odor. This odor which is released through the breath, skin, urine & feces with varying strengths is due to the breakdown of the allium sulfur groups. When metabolized these groups produce allyl methyl sulfide which cannot be metabolized. It passes into the blood stream and out of the body through the modes explained above.

Chlorophyll found in green veggies and herbs is known to facilitate the removal of the allyl methyl sulfide and reduce the garlic smell. Parsley, fennel seeds, mint, & peppermint among other things are very good at masking this smell. Be sure to utilize these in any potent garlic enriched meals or take them directly afterwards.

The benefit of the strong garlic odor is that it naturally repels mosquitos, ticks and other parasites in and around the body. Large doses of garlic are known to kill internal parasites such as tape worm and strong bacteria and viruses.

About the author:Dr. David Jockers owns and operates Exodus Health Center in Kennesaw, Ga. He is a Maximized Living doctor. His expertise is in weight loss, customized nutrition & exercise, & structural corrective chiropractic care. For more information go towww.exodushc.comTo find a Maximized Living doctor near you go towww.maximizedliving.comDr. Jockers is also available for long distance phone consultations to help you beat disease and reach your health goals

Posted by pratanacoffeetalk at 8:24 AM