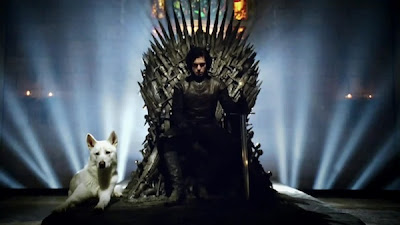 Last year, "Game of Thrones" became a breakout hit for HBO, turning George R.R. Martin's fantasy novel into an epic show that pleased diehard fans of the book while pulling in a wider audience with ample servings of sex, violence and intrigue to rival "The Sopranos," "Boardwalk Empire" and "True Blood."

And when season 2 debuts Sunday, viewers can expect more of the same. Lots more.


The second book in Martin's epic series, "A Song of Ice and Fire," is called "A Clash of Kings," and that, in a nutshell, sets the table for what to expect in the show's sophomore outing.

Show-runners have promised that everything gets ratcheted up in season 2.

Epic battles (largely kept off screen because of cost concerns in season 1) will unfold before our eyes. Even more characters will emerge as players (or pawns) in the so-called War of the Five Kings, and the world will get bigger as key characters travel throughout the kingdom of Westeros and beyond.

All of which threatens to get a touch confusing for folks who haven't already delved into Martin's novels -- a series that has spanned 16 years and five books, with two more promised.

So here's a quick look at where season 1 left off and, with a bit of insight from the novels, some hints at what to expect as the tale continues to unfold.

Joffrey Baratheon: The nasty brat Joffrey sits on the Iron Throne. A Baratheon in name only, the sniveling teen king represents the hopes of the immensely wealthy Lannister clan, most notably his mother, Cersei. But the little-known fact that he's actually not late King Robert's son, instead the inbred offspring of Cersei and brother Jaime, has given hope to his challengers.

Robb Stark: After his father, Ned, was beheaded at Joffrey's command, Robb called his troops and headed south, seeking both revenge and the return of his sisters, Sansa and Arya. Along the way, his followers crowned him King in the North, essentially seceding from the Seven Kingdoms of Westeros. With the counsel of his mother, Catelyn, he's had great success on the battlefield, taking renowned warrior Jaime Lannister hostage in the process. But he finds himself turned off by the political machinations that come with his new title, not the least of which being the promise of an arranged marriage.

Renly Baratheon: Old King Robert's youngest brother, Renly, is charismatic and a familiar face at King's Landing, where he was an adviser to his brother. When season 1 ended, he and ... ahem ... special friend Loras, the Knight of Flowers, have fled the capital with hopes of returning to claim the throne. Unfortunately, even if Joffrey is deemed illegitimate, Renly is not technically next in line, that status instead going to ...

Stannis Baratheon: Stannis was an offscreen presence throughout season 1. Ill-suited for the niceties of royal life, Stannis is the polar opposite of Renly in appearance and demeanor. But as Robert's oldest brother, he has the better claim. As Stannis emerges, he'll introduce us to one of the story's most enigmatic characters. Yes, Westeros is roughly equivalent to medieval Europe. But magic exists as well.

Daenerys Targaryen: Dany provided the first season's dramatic conclusion, emerging from what appeared to be deadly flames with three hatchling dragons. She's the daughter of the "Mad King" who Robert deposed. But season 2 finds her stranded across the Narrow Sea, and most of deceased husband Khal Drogo's followers having deserted her. She's not a player in the current struggle for Westeros. But ... you know ... she's got dragons.

Astute readers may have noted that list only includes four kings -- hardly enough for what's called the War of the Five Kings. Rest assured ... treachery, backstabbing and old wounds will remedy that soon enough.

Meanwhile, back at the Wall

While the powers-that-be to the south fight amongst themselves, Jon Snow and his sworn brothers of the Night's Watch are the only ones aware of the threat from the mysterious White Walkers and increasingly restless wildlings to the north.

Having returned to the Wall after nearly abandoning his post to fight beside half-brother Robb, Jon has joined a band of watchmen making the dangerous trip beyond to seek out his lost uncle, Benjen, and try to learn more about the growing threat.

Season 2 will open Jon's eyes to a whole new world and bring changes for Sam, the portly and cowardly brother Jon protected and befriended, as well.

In Martin's world, a relatively minor character can re-emerge as a major player, sometimes long after they're introduced.

New characters also will appear thoughout the season, notably Brienne of Tarth (a warrior woman and arguably one of the tale's most sympathetic characters) and Melisandre of Asshai (a priestess of far more dubious motivations).

And what of Tyrion?

Fresh off an Emmy Award, Peter Dinklage has become a fan favorite as Tyrion, the dwarf brother of the tall, strong and beautiful Lannister clan.

Having survived captivity at the hand of the Starks and then what should have been a suicide battle mission (ordered by his own father, Tywin), Tyrion will find himself at the heart of the intrigue at King's Landing.

Look for him (man-at-arms Bronn and companion Shae in tow) to play a more central role in the power struggle, even as his love-hate (OK ... usually hate-hate) relationship with sister Cersei and father Tywin continues to simmer.