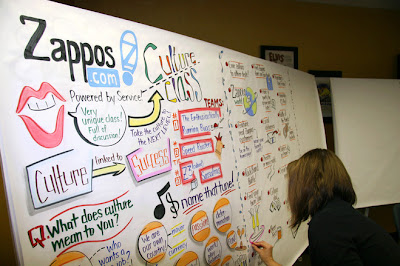 Put down that smartphone; pick up that crayon.

Employees at a range of businesses are being encouraged by their companies to doodle their ideas and draw diagrams to explain complicated concepts to colleagues.

While whiteboards long have been staples in conference rooms, companies such as Facebook Inc. are incorporating whiteboards, chalkboards and writable glass on all sorts of surfaces to spark creativity.


Firms are holding training sessions to teach employees the basics of what's known as visual note taking. Others, like vacation-rental company HomeAway Inc. and retailer Zappos, are hiring graphic recorders, consultants who sketch what is discussed at meetings and conferences, cartoon-style, to keep employees engaged.

Doodling proponents say it can help generate ideas, fuel collaboration and simplify communication. It can be especially helpful among global colleagues who don't share a common first language. Putting pen to paper also is seen as an antidote to the pervasiveness of digital culture, getting workers to look up from their devices. And studies show it can help workers retain more information.

Even with advanced gadgets such as smartphones and tablets, "the hand is the easiest way to get something down," says Everett Katigbak, a communication designer at Facebook. Most of the walls at the company's offices around the country have been coated with dry-erase or chalkboard paint or a treatment for glass to allow employees to sketch ideas whenever they arise. The company's offices are filled with jottings, from mathematical equations to doodles of cats and dollar signs.

IdeaPaint Inc., which makes a paint that turns a surface into a whiteboard, says its sales have doubled annually since the product was introduced in 2008. The Ashland, Mass., company says more than half of its business is in the workplace. 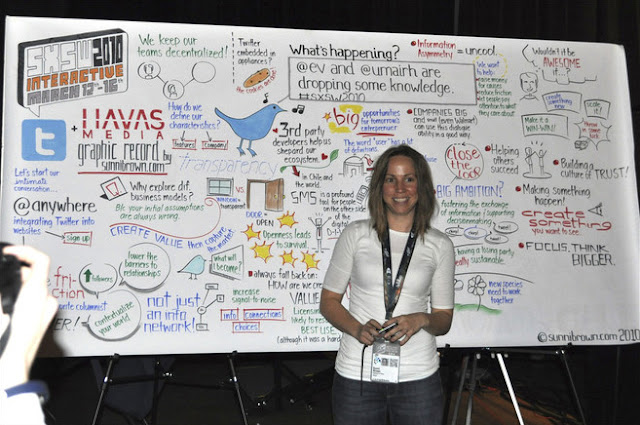 A 2009 study published in the journal Applied Cognitive Psychology found that doodlers retained more than nondoodlers when remembering information that had been presented in a boring context, such as a meeting or conference call. The logic, according to Jackie Andrade, a psychology professor at the University of Plymouth in England, is that doodling takes up just enough cognitive energy to prevent the mind from daydreaming.

Whiteboards cover almost every wall and table. Markers, sticky notes and construction paper are readily available. There are also pipe cleaners and foam balls for 3-D models, and employees make props like hats and glasses to help them act out concepts. Employees use the materials mainly at project kickoffs or when trying to define a project or new process.

To loosen up employees, meetings sometimes begin with participants sketching self-portraits. Although some engineers are skeptical and say they can't draw, "it gets them in the mood," Ms. Courage says. 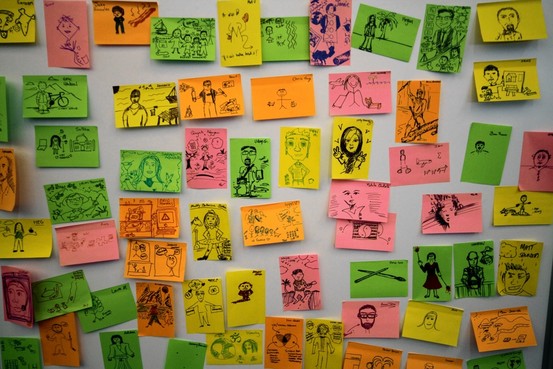 Audra Kalfass, a Citrix software-development engineer, says when she meets with her team and there is a technical issue, "it's natural to start drawing stuff." Since nearly every surface in design meeting rooms can be written on—even the tables are made of whiteboards—"you just grab a marker and you start drawing," she says.

Ms. Kalfass says she is a "horrible" artist. Nevertheless, "it doesn't take much artistic ability to communicate visually. You don't have to be amazing artists... It's mostly boxes and lines and stuff like that to get your point across."

At Spectrum Health System, a Grand Rapids, Mich., health-care provider and insurer, technology managers took a workshop with Dan Roam, a San Francisco "visual problem solving" consultant, on using images like stick figures and arrows to explain the complexities of the health-care industry to Spectrum employees. 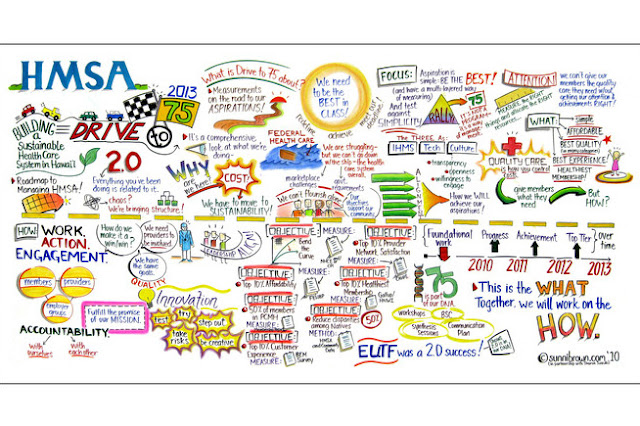 After the workshop, Chief Information Officer Patrick O'Hare helped create a presentation featuring cartoonlike sketches for the chief executive. In one, the company's three business branches—health insurance, hospitals and physician clinics—were depicted as a body, representing the consumer, divided into three parts. Mr. O'Hare's presentation was a hit, he says, much better than the PowerPoint presentation he had delivered a few weeks earlier.

Mr. O'Hare says he isn't a good artist but the workshop taught him it was "OK to stand up in front of a group and draw stick figures. It doesn't have to be so pristine."

HomeAway, an Austin, Texas, vacation-rental company, hired a graphic facilitator to help train a dozen employees—including senior managers and training and human-resources staff—to use visual shorthand and sketching to help guide meetings, says Lori Knowlton, the company's vice president of human resources. The aim was to better "capture ideas using images," she says. Plus, it is more fun than "being surrounded by spreadsheets and emails."

The company also brought in graphic recorder Sunni Brown to help sketch, in real time, what was discussed at a large company meeting on HomeAway's strategy. The resulting cartoonlike image, which serves as the meeting's minutes, hangs framed at the company's headquarters. 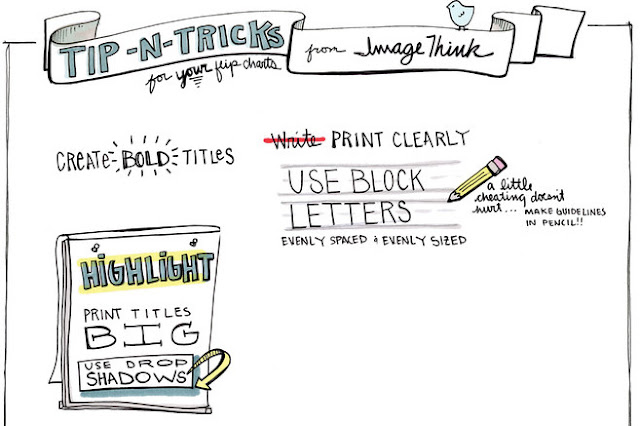 The exercise yielded more than 200 promising ideas, some of which are in development, says Amy Zehfuss, vice president of network strategy for the Time Warner Inc. TWX +2.09% unit. "Seeing all the stickies on the tree is a really powerful visual," she says.

Even PowerPoint software developers do their share of doodling.

Sketches help "get everyone on the same page and can convey the emotion and experience of the user," he says. Eventually, the images are transferred to PowerPoint decks, he says. Inevitably, developers sketch and scribble over the deck's whiteboard projections.

Posted by pratanacoffeetalk at 12:25 PM