THE TABLE AND LOVE 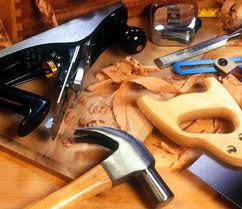 One day a gentleman came to the orphanage and he talked with the head office and they agreed to allow him to come in, every other week, and teach the children how to do woodworking projects.

I remember the night, when I was eight years old, when I finished my first project. It was a small table with a formica top and I was so proud of that table and I looked upon it as though I had created a life.

It was absolutely beautiful not to mention this was the first time in our whole lives that the orphanage had allowed us to use our own minds. It had taken me six weeks to complete my project and I could hardly wait to give my little table to Mother Winters, as a gift.

Mother Winters was our head mistress, the administrator of our orphanage. We called all of our female caretakers "Mother"--it was a title we used when talking to them. As the table legs were not dry from the clear coating that had been applied, the man asked us to wait until our next session before taking our projects to our dormitories. But I was just so excited and happy I couldn't wait. Besides, my woodworking project was the best one of all. (Except for this full size row boat some ten year old nut was trying to build.)

I moved my table toward the doorway and waited for the right opportunity to escape. Then out the door I went like a flash, running through the darkness with my little hands underneath the table top, just smiling from ear to ear, as I headed toward the dormitory.

When I reached the dormitory I placed the beautiful little table beside my bed and I just stood there for about ten minutes just looking at what I had created with my own mind. Then Mother Winters entered the room. I pointed at the table and she smiled at me and I felt so proud. She asked me where the other children were and I told her that they were cleaning up the sawdust and would be coming soon. She walked over to the table and ran her hand across the slick formica top. "It is very pretty", she told me.

When she touched the table leg she noticed that the leg was still wet from the clear coating that I had brushed on eariler. She asked me why I had brought the table into the dormitory with the legs still wet. I did not know what to say, so I just stood there with my head down and I did not say anything.

"Were you supposed to bring this home?" she asked.

Mother Winters walked over to the little table and with her foot, kicked it over onto its top. Then she stepped onto each of the small table legs, breaking them off. She then opened the side door and had me throw the little table out into the yard.

I hid the table in my closet and I never returned to the wood shop after that, ever again. About a year later I gave the little table and legs to Mother Henderson, my houseparent, so she could throw them away.

About thirty years later I tried to find as many of the orphanage children as possible in order to have a reunion, which we had in Jacksonville, Florida in 1991. That's when I learned that Mother Henderson, was living in Asheville, North Carolina.

Several weeks later I drove up to see her and we visited and talked for about four or five hours. As I was about to leave she asked me to come down to her basement and help her get something important. So we climbed down into her dark, cold, damp celler.

This shaking, seventy-five year old, woman walked over into a dark corner and picked something up. As she turned around I could see that she was holding a little table with four broken legs.

"Do you remember this?" she said.

I just stood there with my head down and I did not say a word. I could not speak for fear of crying.

"Roger I want you to have this."

Mrs Henderson gave me back that table that so long ago I had given up for lost. She had kept it all these years, never knowing if she would ever see me again. Her intention was to save the table because she could not rid herself of the pain she remembered seeing in this orphan's eyes. My inscribed name that I had etched underneath the table was still there.

Since then, I have sanded, clear coated, and replaced the legs. That little formica table--that was my first woodworking project so many years ago--now sits in my grand-daughter Chelsey's bedroom, only a few feet from where I sit now, along with her little plastic (sissy) chair that her poppa gave her.

I look at that table today with bittersweet memories. I think of my heartbroken disappointment of the time Mother Winters forced me to throw my broken table out the door. But I am comforted and rejoice at the kindness of Mother Henderson who kept that little table as a remembrance--never wanting to forget the story of a young orphan who tried so very hard to please.