POPCORN HAS "MORE ANTIOXIDANTS THAN FRUITS AND VEGETABLES" 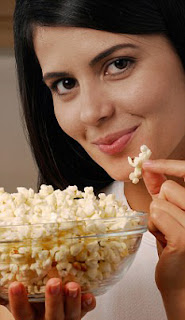 Plain popcorn has already been hailed as a great diet food for its low calorie content but now a group of scientists claim it may even top fruits and vegetables in antioxidant levels.

Researchers discovered one serving of popcorn has up to 300mg of antioxidents - nearly double the 160mg for all fruits per serving.

They also found that the crunchy hulls of the popcorn have the highest concentration of antioxidents and fiber.

The scientists from the University of Scranton in Pennsylvania unveiled their discovery at a meeting of the American Chemical Society in San Diego.

But Mr Vinson warned that people can't forgo their five-a-day in favour of popcorn - as it doesn't contain vital vitamins and nutrients found in fruit and vegetables.

Although he added that popcorn has many other health benefits, stating: 'Popcorn may be the perfect snack food.

'It's the only snack that is 100 per cent unprocessed whole grain.

'All other grains are processed and diluted with other ingredients, and although cereals are called 'whole grain', this simply means that over 51 per cent of the weight of the product is whole grain.

'One serving of popcorn will provide more than 70 per cent of the daily intake of whole grain.

'The average person only gets about half a serving of whole grains a day, and popcorn could fill that gap in a very pleasant way.'

The scientists warned that preparation is key to culling popcorn's health benefits.

Mr Vinson added: 'Air-popped popcorn has the lowest number of calories while microwave popcorn has twice as many calories as air-popped.'


-------------
http://www.dailymail.co.uk/health/article-2120346/Forget-day-Popcorn-antioxidants-fruit-vegetables.html?ito=feeds-newsxml
Posted by pratanacoffeetalk at 1:06 PM