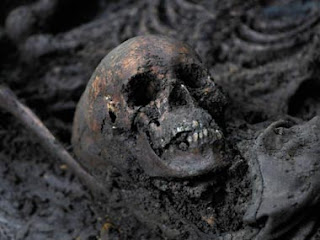 The mysterious fossils unearthed in Chinese caves could be of a previously unknown type of human, as the skeletons possess a highly unusual mix of bygone and modern human features, scientists have claimed.

Surprisingly, the fossils are only between 11,500 and 14,500 years old. That means they would have shared the landscape with modern humans when China’s earliest farmers were first appearing, the researches said.


“These new fossils might be of a previously unknown species, one that survived until the very end of the ice age around 11,000 years ago,” said lead researcher Darren Curnoe, a palaeoanthropologist at the University of New South Wales in Australia.

“Alternatively, they might represent a very early and previously unknown migration of modern humans out of Africa, a population who may not have contributed genetically to living people,” Curnoe was quoted as saying by LiveScience.

At least three fossil specimens were uncovered in 1989 by miners quarrying limestone at Maludong or Red Deer Cave near the city of Mengzi in southwest China. They remained unstudied until 2008. The scientists are calling them the “Red Deer Cave People,” because they cooked extinct red deer in their namesake cave.

“They clearly had a taste for venison, with evidence they cooked these large deer in the cave,” Curnoe said.

Carbon dating, a technique that estimates the radioactive decay of carbon in samples of charcoal found with the fossils helped establish their age. The charcoal also showed they knew how to use fire, the researchers said.

Stone artifacts found at the Maludong site also suggest they were toolmakers, reported journal PLoS ONE.

Meanwhile, a Chinese geologist found a fourth skeleton, which looks very similar to the Maludong fossils, in a cave in southwest China in 1979. It stayed encased in a block of rock neglected in the basement of an archaeological research centre until 2009 when it was rediscovered by the international team.

The Stone Age fossils are unusual mosaics of modern and archaic human anatomical features, as well as previously unseen characteristics. This makes them difficult to classify as either a new species or an unusual type of modern human, the researchers said.

For instance, they said, the Red Deer Cave people had long, broad and tall frontal lobes like modern humans. These brain lobes are located immediately behind the forehead, and
are linked with personality and behaviour.

Unique features of the Red Deer Cave people seen neither in modern nor known archaic lineages of humans include a strongly curved forehead bone, very broad nose and eye
sockets, and very flat cheeks that flare widely to the sides to make space for large chewing muscles.

The Red Deer Cave people, believed to be living in China at the end of the ice age, are the youngest population to be found anywhere in the world whose anatomy does not comfortably fit within the range of modern humans, whether they be modern humans from 150 or 150,000 years ago, the researchers noted.

“In short, they’re anatomically unique among all members of the human evolutionary tree,” Curnoe added.

----------
http://www.firstpost.com/fwire/world-fwire/mysterious-fossils-found-in-china-may-be-unknown-human-species-245378.html
Posted by pratanacoffeetalk at 6:00 AM