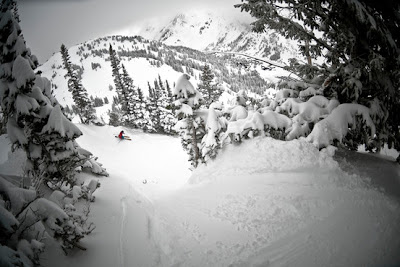 "It is ungraspable," she said. "You can't understand it."

Kristen Ulmer, extreme sports pioneer and former U.S. Ski Team member, was teaching us how to ski. Sort of.

"You can only be the concept," she said to the retired physician, one of the more exasperated of our motley crew of 17 skiers gathered in a sparse room at the base of Alta Ski Area, near Salt Lake City. Beyond the glass walls, the mountains were beautifully silhouetted against a deepening pink sky. It seemed a perfect backdrop for the first night of Zen ski camp, but the questioning doctor wasn't the only one feeling uncomfortable.

For the past nine years, Ms. Ulmer has been running Ski to Live, a three-night, two-day ski camp that promises to be transformative while including almost zero technical instruction. There is no talk of stance or edge angulation—it is your mind that is getting trained. The all-in-your-head program is supposed to make skiers, snowboarders and telemarkers into better athletes, but also better people. During the first session, Ms. Ulmer proclaimed: "By the end of the camp, you'll feel freer than you ever have."

It wasn't the life-changiness that had attracted me to the idea, though. Half of me wanted to ski Alta's famous steeps and chutes; the other half just wanted to meet the teacher.

Ms. Ulmer is a big-mountain legend. In the 1990s and early 2000s, she was famous for skiing you-fall-you-die Alaskan faces, hucking front flips off 70-foot cliffs and pushing the limits of extreme skiing. Then, in 2003, in the middle of a flourishing career, she wrote to her sponsors and told them she was quitting. She wanted something more, she said. 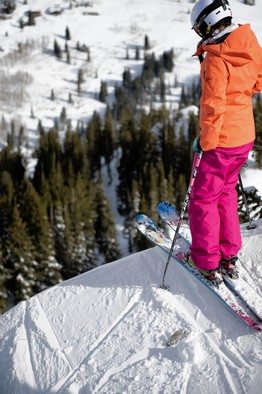 "I was an egotistical hedonist," Ms. Ulmer told me. "Now I try to help people. The separation of good from great is the mind." Believing that mindset had been crucial to her skiing success, she decided to start camps that focused on the mental game. The first one, which involved a sports psychologist, didn't feel quite right. On a whim she invited Zen teacher Dennis Merzel to her second, and everything clicked.

Our group ranged almost five decades in age, and included a Los Angeles gem dealer, a pair of outdoorsy magazine editors and a stay-at-home mom. Ms. Ulmer cuts a striking, athletic figure, and when the first session began, I was a little in awe. But there was little talk of her ski stardom. Instead, she delved into the basics of Mr. Merzel's Big Mind Zen: a blend of Buddhist concepts of self with a western psychological approach called "voice dialogue."

I feared a spate of New Age frilliness, but Ms. Ulmer's approach was fairly straightforward, peppered with humor and anecdotes. Big Mind Zen posits that there are many facets, or "voices," in every personality. Some of those we nurture, some—the "bad children in the basement"—we repress. By recognizing the voices we have been squashing, and simplifying our thoughts, we can change our patterns for the better.

So far, so good. Then Ms. Ulmer asked to "speak" to certain voices—first, the "gatekeeper," our wall. "My job is to protect, and keep the world out, so she doesn't get hurt!" one student yelled out. It was unnerving—and not just because my voices didn't have as much to say.

In the next morning's thin sunshine, Alta once again seemed the ideal place to develop simple thoughts. Eschewing the glitz of many modern resorts, the base area is about basics. The buildings, labeled "Ski Shop," "Lodge" and "Café," are unpretentious, decorated with vintage shots of Alta, which opened in 1938. The surrounding white mountains created a crisp, isolated world.

Our group had varying levels of skiers, and there was a palpable air of apprehension about our first day on Alta's advanced terrain. We started by practicing to ski in each voice—doing a run as if one feeling ruled our world. We began with fear, a big one in skiing. I picked the most advanced of our three groups for more challenging runs, and tried to ski around feeling afraid of everything. I pretended each rollover or curve was terrifying. I felt like an idiot.

We moved on to control, arrogance, the analytical mind, the showoff and anger. I tried my best to play the game—and was eventually amazed at how different each run felt. My awkwardness lessened as I lost myself in the voices.

Skiing in the analytical mind taught everyone that overthinking skiing is not fun. A few runs later, I furiously smashed my skis into the snow, finding that anger paired excellently with big moguls. But when we were told to ski in the voice of the know-it-all, the doctor couldn't take it. "As a small organ system specialist I know I can't know everything, and—"

Ms. Ulmer interrupted. "You know it all!" He didn't say any more, but seemed to still wrestle with the idea. The rest of us found it easy to ditch all sense of humility. My ego expanded as I thought about all the skiing I've done, and the terrain fell away behind me.

I finished the day exhilarated. The skiing was not the most challenging I've ever done, but I was experiencing the hill in a new way. I was also exhausted from all the exertion—and all the thinking.

Ms. Ulmer sized us up as we straggled into the classroom. Then she offered us some Red Bull. At first, we all refused, but the cans, lined up in shiny rows opposite a set of Buddhist hangings, proved irresistible. Everyone was so tired that any irony was lost, and cans softly cracked open one at a time.

The evening was another three hours of anecdotes, voice dialogue and Zen wisdoms, followed by a yoga session, which I skipped in favor of bed.

The following day, I decided I was really enjoying ski camp. Even the doctor was getting it. "I think I'll be a better skier, and I will use this way of thinking," he said on the chairlift. Then, an hour later, a mother of four who wanted to write a book tearfully broke down during a lesson. Everyone looked around understandingly, but I felt awkward and clueless again.

I got on the lift, crankily mulling my failure to grasp what had just happened. But a few minutes into the ride, I realized that maybe I did understand what we were doing—I just couldn't explain it. Suddenly it all seemed OK. Which is, actually, very Zen.

By the final day, some of us decided we were ready for some of Alta's most challenging terrain—a steep, bumpy, double-black accessed by a rocky roller coaster of a traverse. We made our way down into the entrance. Fear was given a nod, then let go as we found different voices to replace it with. And we dropped one by one, for a perfect descent.