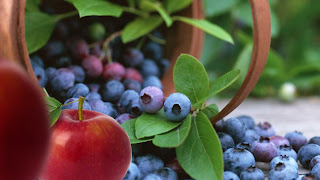 A new study conducted by American researchers has revealed that eating fruits with flavonoids such as blueberries, apples and pears reduces the risk of diabetes.

These fruits are loaded with flavonoids, a natural compound present in certain fruits, vegetables and grains, which some research has tentatively tied to heath benefits such as a lower risk of heart disease or cancer.


"People who ate a higher amount of blueberries or apples, they tended to have a low risk of type 2 diabetes," said An Pan, a research fellow at the Harvard School of Public Health who worked on the study.

The findings show an association, he added, but don't prove the fruits, themselves, prevent diabetes.

The new work, published in the American Journal of Clinical Nutrition, parallels a study published in the same journal last year associating flavonoid-rich fruits with a reduced risk of high blood pressure.

According to the American Diabetes Association, approximately 26 million Americans have the disease. It's caused by a defect in the body's ability to produce or use insulin, a hormone that converts glucose in the blood into energy.

Type 2 diabetes can usually be controlled with exercise and diet changes and without insulin.

For the new U.S. National Institutes of Health-funded study, researchers tracked the dietary patterns of approximately 200,000 men and women for up to 24 years.

The participants, who were enrolled in three large ongoing studies of American health professionals, filled out regular questionnaires about how frequently they consumed certain foods and beverages of a standard portion size.

None had diabetes at the outset, but about 12,600 of the participants were diagnosed during the research period.

The lightest blueberry eaters in the study reported getting less than one serving (half a cup) of the fruit per month, while the biggest blueberry consumers had two or more servings per week.

The researchers suggested that certain flavonoids especially high in those fruits might be behind their possibly beneficial effect on diabetes risk.

"We found consistent results across the three (study groups) that apples and blueberries are beneficial for type 2 diabetes," Pan told Reuters Health.

That was after taking into account other risk factors, such as body weight, cigarette smoking and a family history of diabetes.

These results jibe with an earlier Finnish report related to consumption of berries and apples and diabetes risk.

But these previous studies were much smaller in scope, Pan noted.

He and his colleagues reported no financial conflicts of interest.

While fruit sugar raises blood glucose levels rapidly, other substances in fruit such as fibers and pectin may have diabetes-related benefits, said Dr. Loren Greene, a professor of medicine at New York University who was not involved in the study.

"It argues very nicely for the consumption of whole fruits rather than fruit juices," she told Reuters Health, citing recent evidence that fruit juices may increase the risk of diabetes.