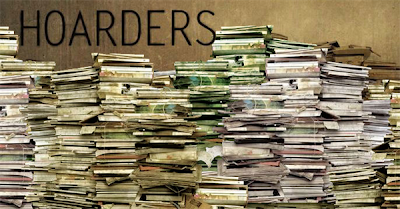 "I save these things mainly because I worry they may vanish from the Net or that I'll want them sometime when I'm away from my Internet connection," he says.

The definition of hoarding is accumulating items beyond the point of usefulness, and it typically applies to things like clothing or cats. But it can also pertain to digital files, a practice that is more hidden than physical hoarding.

"Digital clutter doesn't beget mice or interfere with walking around the house," says Kit Anderson, past president of the Institute for Challenging Disorganization, a nonprofit in St. Louis, that studies hoarding behaviors. "But it's more insidious because no one else is going to insist that you get help."

Nobody knows how many Americans have digital-hoarding issues (an estimated 5% are physical hoarders), but the proliferation of devices, the explosion of information and the abundance of cheap storage have made it all too tempting for some people to amass emails, text messages, Word documents, Web pages, digital photos, computer games, music files, movies, home videos and entire TV seasons than they can ever use or keep track of.

"Digital hoarding is a huge problem. There is so much available storage, we don't have to make decisions anymore," says David D. Nowell, a neuropsychologist specializing in attention issues in Worcester, Mass. "The problem isn't that it slows down your computer—it slows down your brain," he warns, since each of those photos, links and folders demands some mental energy.

Of course, plenty of people manage to keep vast collections of emails, files and digital media organized and accessible, cutting down on physical clutter in their lives. Kathy Riemer, a communications consultant in Chicago, says her "digital retentiveness"—including 2,400 Word documents and 39,575 business emails, divided into 69 file groups—enhances her productivity and gives her peace of mind. "Saving it all helps me avoid recreating an already-built wheel and enables me to provide historic context for long-term projects," she says.

There isn't a set number of emails in an inbox or photos saved that defines a hoarder. Accumulating crosses the line into hoarding, experts say, when it is disorganized and dysfunctional and gets in the way of other relationships and responsibilities.

Christina Villarreal, a cognitive-behavioral therapist in Oakland, Calif., says she has clients in the tech industry—young men mostly—who spend so much time and money amassing collections of music or games or gadgets that they withdraw from the real world. "They can't pay their rent or buy food because they have to have this latest piece of equipment to support their habit," says Dr. Villarreal. She notes that hoarding often starts out as a way to feel good or fill an emptiness in life, but it leaves sufferers even more isolated. She helps clients relearn basic social skills and find other enjoyable activities instead.

Digital hoarding can stem from the same psychological issues as other kinds of hoarding, experts say. "It comes down to fear and indecision," says Katherine Trezise, current president of the Institute for Challenging Disorganization. "I see people who have hundreds of icons on their screen because they're afraid they can't find them again."

Hoarding is officially considered a form of obsessive-compulsive disorder, but some hoarders also suffer from attention-deficit-hyperactive disorder. Some digital hoarders are driven perfectionists who don't know when to stop researching or collecting.

Indeed, all that saving and storing can backfire and create more anxiety if it's impossible to find. "Many of our clients have great difficulty with categorization," says Ms. Anderson.

Digital disorganization can also create strife between co-workers or family members who share equipment, storage space or files. Felecia Hatcher runs a gourmet ice cream business in Miami and shares a computer with her husband, Derick Pearson. She hates to delete anything, so she has 31,000 digital photos, 26,000 unread email messages and has even maxed out her free Gmail space, while her husband is "super, super organized," Ms. Hatcher says. "It drives him nuts when he uses my computer, and it drives me nuts when I get it back from him and he's organized everything."

Technology companies offer a host of solutions for such problems, including tools for archiving, tagging, filing and finding things on even the messiest of computers. And there is a growing trend toward keeping digital material in the cloud rather than on a hard drive. Websites that stream music, movies and TV shows, such as Rdio, Netflix and Hulu, eliminate the need to store large media files, just as Flickr and Picasa do for digital photos.

Duplicating programs like Carbonite can continuously back up everything on a computer, which should alleviate the fear of losing content. Programs like Dropbox let users store anything in virtual storage lockers that can be accessed from almost any Internet-connected device with a user name and password.

As useful as such programs are, professional organizers warn that simply adding more storage removes any incentive to delete or prioritize. People need to evaluate what their cloud needs are, says Lauren Halagarda, a member of the National Association of Professional Organizers who specializes in digital issues.

Sometimes, what needs organizing most is the hoarder's mind-set. "It's important not only to take care of the stuff, but also to take care of why that behavior is occurring," says Marla Deibler, a psychologist in Cherry Hill, N.J., who often treats hoarders. "What do you really need? What are you afraid of losing?"

For his part, Mr. Carter says he has never used streaming audio or video, needed a separate search program for his hard drive or stored anything in the cloud. He knows where everything is and how to access it. Some friends wonder why he stores so much, "but then I have something they need, so I don't take the criticism too seriously," he says. "I do have a sink full of dirty dishes," he adds. "I can't help it. I'm a single guy."

When a Busy Inbox Signals a Problem
There are no official criteria for 'digital hoarding' but there are some tell-tale signs:

• You've exceeded your 7 gigabytes of free space in Gmail and have to buy more.

• Deleting anything makes you anxious—even things you can't remember why you saved.

• You spend more time searching for a file than it would take to download it again.

• You have dozens of icons on your desktop and don't know what they're for.

• You can't remember all your email or social-media accounts or how to access them.

• You have flash drives scattered in drawers, pockets and purses and no idea what's on them.

• Of your thousands of digital photos, the vast majority are duds.

• You have entire seasons of bad TV shows you have no intention of watching.

Digging Out
Professional organizers who specialize in technology issues offer these tips for conquering digital hoarding:

• Practice 'zero email.' Discipline yourself to clean out your inbox completely every day, answering, filing or deleting each item.

• Declare 'email bankruptcy.' Delete every unread email in your inbox and alert your 10 best friends and colleagues that if they have sent something crucial, they should send it again.

• Set your spam filter to block any regular emails you don't want to receive.

• Don't check your inbox continuously, and disable the 'dinger' alerts. Set specified times to read and answer email each day.

• Don't copy and save documents; save Internet addresses where you can find them later, if necessary.

• Remember, people typically use only about 20% of what they save.