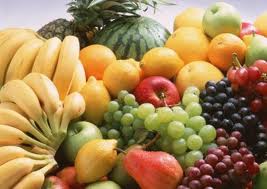 The close association between sugar intake and diabetes has led to a few misconceptions about diabetics and their diet restrictions. Most diabetics can eat the same foods as those without the disease, but the question becomes how much and how often. Diabetics can indeed eat fruit, and in fact are strongly encouraged to choose fruit over more processed foods high in sugars and other carbohydrates. Fruit contains natural fiber, vitamins, enzymes and other essential nutrients that diabetics need to maintain a normal lifestyle.


The assumption that fruit would be dangerous for diabetics stems from the relationship between sugars and insulin levels. Insulin is designed to break down sugars and carbohydrates, but certain foods contain higher levels of these chemicals and demand more insulin production to break down. Many diabetics cannot produce enough natural insulin to handle a high amount of carbohydrates or sugars at one time. Diabetic menus take into account the relative amount of sugars and carbohydrates present in foods, also known as a glycemic index.

The majority of common fruits have a low to medium glycemic index, which means most diabetics can safely metabolize the fruit sugars through natural insulin production. A few fruits, such as dried dates, may be relatively high on the glycemic index, but they can still be eaten in moderation. The key to eating fruit on a diabetic diet is to space out the portions over the course of a day. Eating too many sweet fruits at once could be problematic for insulin-dependent diabetics, but in general most fruits should not create a dangerous spike in blood sugar levels.

Fruits such as apples and oranges provide fiber as well as fructose or fruit sugar. It can be a challenge for diabetics to get enough fiber in their diets because many foods high in natural fiber may also be high in starch, sugar or other high glycemic ingredients. Fruit can also satisfy diabetics' cravings for processed sweets such as doughnuts and cakes. A cupful of grapes or a medium size apple between meals can help diabetics maintain their blood sugar levels without creating sudden spikes that can overwhelm an already overworked insulin-producing pancreas.

If someone needs to raise his or her blood sugar quickly, such as an athlete running a sprinting race, he or she would want to consume foods with a high glycemic index. These foods provide a quick burst of energy, essential for an athlete. For most people, foods with a low glycemic index are the best choice in keeping blood sugar levels consistent over long periods of time.

Foods with a high glycemic index rating are those that are digested quickly, giving the person who eats them a fast burst of energy. These foods leave the eater feeling hungry and lethargic a short time later, however. Foods with a high glycemic index include white bread, pasta, and white rice. These are the same foods that many nutritionists refer to as "bad carbs."

Food with a low glycemic index reading fill you up, but raise blood sugar slowly and steadily. This gives the eater a longer feeling of being full, and more continuous energy. These are also foods containing carbohydrates, but are considered "good carbs" such as those found in many fruits, vegetables, and whole grains.

The glycemic index is an important tool used in treating people with diabetes and in weight loss programs. A food with a low glycemic index makes a person feel full longer and stay satisfied longer, so he or she is less likely to overeat. For the diabetic, the traditional way of controlling blood sugar was through counting carbohydrates. Since the inception of the glycemic index, endocrinologists have determined that not all carbs are the same. Those with low glycemic indexes are the best choice for diabetics.

What Is a High Glycemic Index?

A high glycemic index is a nutritional indicator which denotes a large concentration of sugar in a food and the strong potential for that food to severely affect blood sugar generally within three hours of eating. The root word “glyco” means sugar. A glycemic index is a sugar scale which ranks foods according to their carbohydrate content. Simple carbohydrates generally score high on the sugar scale and are ranked as high-glycemic index foods, while vegetables typically rank the lowest because they have little sugar and generally do not cause great shifts in blood sugar. Fruits can have a moderate impact on blood sugar and often rank as medium- or low-glycemic index snacks.

Complications related to diabetes necessitated the original glycemic index, which was created by a Canadian doctor in 1981 to guide sugar-sensitive diabetics who suffered from great swings in blood sugar and the related anxiety, lethargy, and headaches that excess carbohydrates can cause. Some sufferers even experienced comas. The high glycemic index, however, has become a coveted staple in areas beyond medical circles; many health-conscious individuals use the indicator on a daily basis to balance sugar intake with protein and vegetables. Loyalists to diet plans like the high-protein Atkins diet also gravitate to glycemic indexes to minimize carbs. Bodybuilders and athletes might rely on a high glycemic index to choose high-quality, sugar-packed foods before a major workout, marathon, or demanding competition so they can have long-lasting energy.