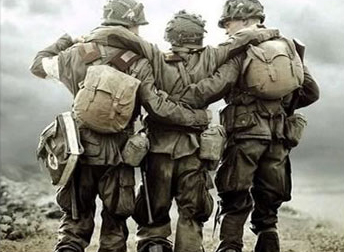 I am not a warrior. No one would accuse me of looking like a warrior. It would surprise people who know me to know that I love war movies like the HBO television series "Band of Brothers" based on novels written by historian Stephen Ambrose. The television series documents real stories of several World War II Veterans, and shows their lives at the time of the war and snippets of now.  Depicted scenes are violent and upsetting. War is documented. Some might like those scenes—I like the portrayal of brotherhood.


There are a variety of scenes in the movie that highlight brotherhood, but my favorite is when the guys are nearing the end of the war, and are sitting around waiting for one last mission to occur.  Words seem unnecessary. The men are simply together.

There is something about brotherhood that is incredibly appealing. And healing.

And yes, I have had it thrown at me several times during my career that I am not "in." Statements like, "Someone who did not serve in Iraq could not understand what it was like to be there," or "You are not a drunk therefore you can't help me find sobriety." Personally, I've always wondered how a sober person would have difficulty finding sobriety, but that's an aside and not my point.

I have no idea if I am as helpful as someone who has "been there." Perhaps. Perhaps not. Yet, I can document some potential truths about why brotherhood is healing.

Brothers understand.
Things don't need to be explained. The understanding is unspoken.  An assumption is made that the other person understands the big picture, the small details, the emotions and the context better than someone who has not been there. Time and energy isn't spent explaining the context. Time isn't spent getting to know each other. Time is spent bonding over similarities and shared experiences.

Brothers are accepting.
When someone is a part of a group, s/he will generally be supported as part of the group. This is true even if the person engages in behavior that someone outside of the group might not be able to get away with. Consider, for example, seeing a group of people come in to eat at a restaurant. One particular person in this group may appear to be anxious, looking around and constantly checking the door every time someone new walks in. You might overhear this individual state that they have to sit in a position where they can see the door and prefer to have their back to the wall. You might overhear this individual state to the hostess that they have to change where they are sitting because the table is unacceptable. Some might view this individual as having issues with anxiety and control. Others, who might be more familiar with this protocol, might view this individual as one of them. The behavior would be viewed as acceptable and they would be accepted.  Someone else engaging in that same behavior, but not part of the group, might be viewed less favorably.

Identity.
Being part of a group becomes part of your identity. I haven't talked to many military personnel who do not identify with their military identity. There are some, believe me, who would prefer to never associate with this aspect of their lives, yet many more who might define this aspect of themselves first. They are a Soldier or a Marine or a Sailor. For life.  And as part of this group, others in the group become their family. Therefore, common characteristics associated with the group become associated with them. For example, military personnel like it when people follow rules. If you tell someone in the military to be somewhere at 9 am, they tend to be there at 9 am. I lived in California for part of my life and 9 am meant some time during the 9 am hour, usually 930 or so. But my point is that attributes associated with the group are revered and accepted. I talked to a soldier today who was furious that his job interview didn't happen right on time. He perceived this to be a problem of respect. He decided if he wasn't going to be respected then he didn't want to work for that company. Other soldiers might support him on his perspective or be able to reframe it in a way that he could be more open to viewing the situation differently.

Only time guard can come down.
Military personnel with symptoms of PTSD have a hard time letting their guard down. Only when they are around others in their peer group can they feel like they can relax.
One group I am "in" is the group of people who studied psychology. Er, um, perhaps it is not as exciting as the other groups represented in this blog, yet I am IN.  Many of us were required to read a book called "The Theory and Practice of Group Psychotherapy" by Irvin Yalom. Some of these same principles, such as universality and cohesiveness, were in the book discussion on why groups are effective.

While the experience of brotherhood provides an opportunity for healing, it might also be important to consider working with individuals outside of the "group" for healing as well. I recently spoke to a marine who was deployed twice to the wars in Iraq and Afghanistan, and he indicated that he was having difficulty being around people in general. He decided to get a job in the community so that he could re-learn how to work with others. He was fired after only a week because a young boy approached him from behind and spooked him. He yelled at the boy, and then at the boy's father who came to defend his son. He lost his job. Even though he lost his job, with better communication all around, healing within both groups could begin.

This was somewhat played out in a scene in Band of Brothers. The scene documents the interaction between a veteran soldier (i.e., one who has been involved in many battles) and a rookie soldier (i.e., fresh from the farm). The duo has the task of guard duty in one of the towers. The veteran decides it is a good time to read and relax. The rookie asks questions and appears to be open to the possibility of some "action." The veteran is not interested in any action and resents the rookie for talking. The veteran yells at the rookie, telling him what things have been like during the past two years at war. The rookie feels bad. The veteran feels bad. And it is at this point where the two begin to communicate.

Brothers accept, they understand, they are part of the same group and the guard can come down.  I wouldn't knock it.

by Tracy Stecker, Ph.D. in Survivors
-----------
http://www.psychologytoday.com/collections/201203/the-tipping-point/how-brotherhood-heals-trauma
http://www.cheapdvd4u.us/image/data/left.Band-of-Brothers-seasons-1-5-DVD-boxset.jpg
Posted by pratanacoffeetalk at 9:42 AM