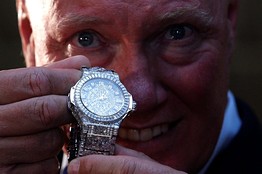 It was a mystery perhaps fitting for James Bond, that most unsecret of secret agents: just who has bought the $5 million watch?

The timepiece, a one-off model produced by LVMH Moët Hennessy Louis Vuitton SA’s Hublot brand, seemed to sum up the confident mood of the watchmakers at this year’s Baselworld show.


After a record year of exports in 2011, the industry is gearing up for more sales in 2012 despite the economic uncertainty in Europe and talk of a slowdown in China.

While you may think some customers may be downsizing their purchases, Hublot has already sold the watch, forged from white gold and encrusted with 1,282 diamonds.

“Last year we made a $3 million watch and sold it to a customer in Monte Carlo, and we have had a lot of interest in this new one,” Hublot chairman Jean-Claude Biver said.

A few days later, all the company would say was that the watch had been sold, to a retailer in Asia.

Mr. Biver is feeling confident about his brand:

His confidence was universal across the show, and hardly surprising among the CEOs who double-up as salesmen at the event where many make up to 70% of their annual sales. Even the stories that are tinged with doubt end happily at the ten-day event which continues until Friday.

“We only delivered one watch to the U.S in 2008,” said Olivier Bernheim, the chief executive of privately-owned Swiss watch brand Raymond Weil.

But after reorganizing its distribution in the country, the U.S market has recovered to become the company’s largest.

“I am always impressed how the U.S. economy and U.S. citizens are able to bounce back,” said Mr. Bernheim. “2012 could be a record year for us, if everything stays as it is today,” he added, without giving any revenue or volume figures.

Elsewhere at the show, the head of Swatch Group AG’s Omega brand said he was looking forward to adding to last year’s record 2 billion Swiss franc sales with a little help from James Bond.

007 will be wearing an Omega in his latest film Skyfall which is due for release this autumn and is expected to have a positive impact on sales.

With the current tensions in the Middle East, Iran is probably one country where you could expect James Bond to turn up. The Islamic republic has also been identified by some watch brands as an important Middle Eastern market.

“There’s some nice growth in Iran, growing year after year” said Peter Stas, managing director of privately-held Frederique Constant. “It’s quite interesting, we have a Jewish distributor there in Tehran. Shows that diversity of religion is still possible.”

In the booming world of watches even the cautionary tales have happy endings.
--------
http://blogs.wsj.com/source/2012/03/12/diamond-watches-are-forever/
Posted by pratanacoffeetalk at 8:37 AM