TURN YOUR OBSTACLE INTO AN ASSET 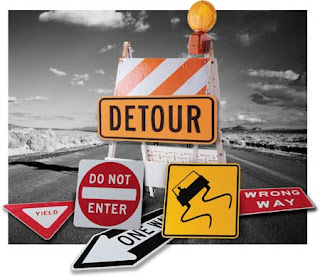 A popular post on this site, Nine Things Successful People Do Differently, provides a fabulous summary of what makes the difference between those who succeed and those who don't. But, in our experience, it misses one really important "thing': Successful people habitually turn obstacles into assets.

People who succeed at work and in life believe and act as if "everything is a gift." Well, maybe not every single thing imaginable. But assuming that everything is a gift is a good way of looking at the problems and surprises you'll encounter in any endeavor, such as, for example, in getting a new venture off the ground, obtaining buy-in with your boss, or launching a new product line in an ultra-competitive market.

Why should you react to a problem with gratitude, whether you are trying to start a business or create anything else? There are a number of reasons.
1
First, you were going to find out eventually what people did and did not like about your idea. Better to learn it as soon as possible, before you sink more resources into the idea, venture or product line, etc.
2
Second, the feedback could take you in another direction, or serve as a barrier to your competitors. You thought you wanted to open a restaurant, but a quick survey told you potential customers thought the area was saturated. But more than a few of them said they would love a place that simply had ready-to-go take out to heat up at home.
3
Third, you got evidence. True, it was not what you were expecting or even wanted, but that still puts you ahead of the person who is just thinking about doing something (like opening a restaurant in your neighborhood.) You know something they don't, and that is an asset. You are ahead of the game.

But what if it's really bad news. It's a disappointment. You were absolutely certain that your boss would approve your idea for a new software program, and she said no in a way that is still echoing down the corridor. No reasonable person can define what you've encountered as anything but a problem, and most people will try to solve the problem. ("Maybe she will like the idea if I go at it this way instead.") That's fine if you can. The problem has gone away and, again, you've learned something that others might not know. (The boss hates Y, but she loves Z.)

But what if you can't solve it? (She hated "Z," too.) Accept the situation to the point of embracing it. Take as a given that it won't ever change, and turn it into an asset. What can you do with the "fact" that it won't ever change? Maybe it presents a heretofore unseen opportunity. Maybe you build it into your product or service in a way that no competitor (having not acted) could imagine. Could you do it on your own? Could you take the idea to a competitor and use it as your calling card to look for the next job? Instead of resisting and lamenting it, treat it as a gift and turn it to your advantage.

For a quick exercise showing that this is easier than you think, take a sheet of paper and divide it into three columns. In the left-hand column, list the obstacles and problems that are keeping you from your goal. Then spend five minutes figuring out as many ways as possible to solve these problems, and list those in the middle column. Show your list of problems and solutions to a friend, and ask them to build on your solutions. When you can't think of anymore solutions, go back to the list of problems in the left-hand column and assume that they can't ever be solved. Now take five minutes with your friend and figure out how those problems could be an asset or an unrecognized opportunity. Put these assets in the right-hand column. Chances are good that, having completed this exercise, you'll turn at least one of your obstacles into an asset.

The thing to remember is this: Successful people work with what they have at hand — whatever comes along — and try to use everything at their disposal in achieving their goals. And that is why they are grateful for surprises, obstacles, and even disappointments. It gives them more information and resources to draw upon.


LEONARD A. SCHLESINGER, CHARLES F. KIEFER, AND PAUL B. BROWN

Leonard A. Schlesinger is the president of Babson College. Charles F. Kiefer is president of Innovation Associates. Paul B. Brown is a long-time contributor to the New York Times. They are the coauthors of Just Start: Take Action, Embrace Uncertainty, Create the Future(HBR Press 2012). Learn more at juststartthebook.com.
--------
http://blogs.hbr.org/cs/2012/02/how_to_turn_an_obstacle_into_a.html?google_editors_picks=true
http://vikingentrepreneur.com/wp-content/uploads/2011/05/business_obstacles.jpg
Posted by pratanacoffeetalk at 7:58 AM