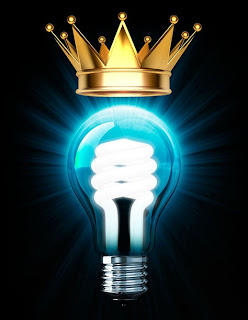 Consequently, top management teams tend to be the Goldilocks of crazy: They don't want insane, and they don't need conventional; they want their craziness to be "just right." Defining those crazy zones is one of the most difficult but more important cultural decisions innovation leadership teams can make. Crazy ideas, of course, can be a source of sustainable competitive advantage.

But where should they come from? What I increasingly observe are intensifying "make vs. buy/open source vs. proprietary" conflicts between getting outrageous ideas from inside the enterprise versus acquiring them from external eccentrics and lunatics. Crazy ideas create cultural — and political — quandaries for organizations. Outside-the-box eccentricities are OK coming from the inside. But truly "crazy" ideas — ones that tempt fate and taunt taboos — appear better off and safer coming from the outside. Accessing crazy ideas may matter more than generating them.

A superb illustration comes from a Nobel laureate physicist and Secretary of Energy Steve Chu's decision to put together a crisis team of outside experts to brainstorm approaches for handling Japan's Fukushima nuclear reactor.  A trove of recently released emails indicate that this outside group had no shortage of crazy ideas. Noted physicist Richard Garwin (who, not incidentally, was long a member of  the Jasons, the Pentagon's elite "crazy ideas" advisory group) proposed setting off a controlled shaped charge to breech the concrete shield protecting the steel containment structure, so cooling water could be pumped in from the outside. An internal Nuclear Regulatory Commission scientist described the idea as "madness."

Put aside (for the moment) its technical details. Look instead at the provocative innovation question it effectively raises: Does the Department of Energy/Nuclear Regulatory Commission want its people coming up with ideas that its own internal experts declare mad? Or is it smarter — politically, culturally, and organizationally — to position those technocracies as skeptical and discriminating consumers of crazy ideas, instead of their originators?

In short, organizations frequently have both institutional biases and incentives to avoid developing crazy ideas. Real craziness is what gets outsourced. It's too risky to be seen as too crazy.

Of course, as anyone following global trends in manufacturing, software development, and customer support well knows, outsourcing dynamics create their own dysfunctional dependencies. Firms lose the ability to innovatively manufacture, modify their systems on the fly, and build bonds with key customers when they overcommit to outsourcing. Similarly, organizations lose the ability to discriminate between — and gain insight from — usefully crazy ideas when they take asylum in outsiders. When organizations aren't careful, the craziness becomes predictably comfortable and comfortably predictable. Even worse, some organizations institutionalize their "crazy" and create a petting zoo of provocative eccentrics.

IBM, for example, had its "Fellows," who were tasked with assuring the computer giant would never be blindsided by technological surprise. The (cruel) joke I was told in T.J. Watson Labs was that these Fellows had access to everything at IBM but budgets. The problem with "designated crazies," of course, is that everyone expects them to live up to their designation.

Admittedly, a crazy idea — like beauty — is in the eye of the beholder. And, like obscenity, most executives think they know it when they see it. But in industry after industry, seemingly crazy ideas are playing a greater disruptive role in shaping competition. That's why the innovative organizations I know struggle with whether they want "crazy" as a core competence or as an accessibly outsourced option.

How does your organization manage the craziness conundrum? Are you a leader in defining the right kinds of crazy for your enterprise? You'd be crazy not to.

MICHAEL SCHRAGE
Michael Schrage, a research fellow at MIT Sloan School’s Center for Digital Business, is the author of Serious Play and the forthcoming Getting Beyond Ideas.