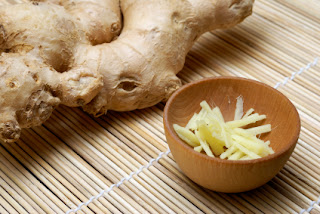 Ginger root is a favorite among herbalists, used in a variety of situations. The spicy root, or rhizome, of the ginger plant can either be eaten raw, powdered, made into tea, juiced, tinctured, or even candied. One of the most common uses for ginger root is for nausea and vomiting. Placebo-controlled, double-blind studies have proven that ginger root effectively reduces nausea and vomiting caused by motion sickness, surgery, and morning sickness during pregnancy. Because organic ginger root is completely safe to use during pregnancy, the herb is especially treasured by pregnant women around the world.

Researchers in a London hospital tested ginger root as an anti-emetic, a "drug" that prevents nausea and vomiting. In a double-blind, placebo controlled study of 60 women who had just had major gynecological surgery, ginger root was compared to a placebo and the drug metoclopramide (Metosalv ODT by Salix or Reglan by UCB). Ginger root compared very similarly to this commonly prescribed anti-nausea drug in reducing nausea after surgery.

The venerable medical journal Obstetrics and Gynecology published a 2001 study on the effectiveness of ginger for pregnancy-related nausea and vomiting. Seventy pregnant of women who were less than 17 weeks pregnant were studied for five months to determine if ginger had any effect on morning sickness. They were given either 1 gram of ginger daily or a placebo. Both nausea and vomiting decreased significantly in the ginger group, while barely at all in the control group. No adverse outcomes were reported. The researchers concluded that ginger is safe and effective for nausea and vomiting during pregnancy.

Complementary Therapies in Nursing and Midwifery reviewed safe alternatives for nausea and vomiting during morning sickness in pregnancy in 2002. The author noted that most pregnant women were reluctant to take any prescription drugs during pregnancy, but that these women did want to find relief from morning sickness. Ginger root was one of the alternatives noted as safe and effective.


About the author:
This article is provided courtesy of Donna Earnest Pravel, owner and senior editor of Heart of Texas Copywriting Solutions.com Get free biweekly tips on natural healing and herbs by visiting her blog, Bluebonnet Natural Healing Therapy.