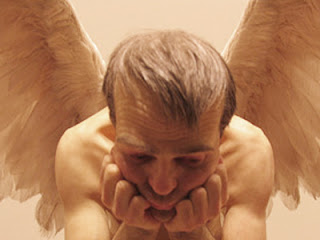 This is true story as told to me by my wife...she was the woman in this story! She told me it at least five times, and I have attempted to describe via written prose the extraordinary events of that special day!

It was just another ordinary day as she performed her tasks at a large university as an administrator working with Hall Monitors and residents. It wasn't uncommon for students to pop in to say a welcomed "Hello" or the like.


This particular day would bring something entirely new her way. As the workday neared its end, she sat at her desk as she completed some paper work. She heard a sheepish giggle and looked up startled by what she saw.

This was not one of the many students that would drop in routinely to ask her a question about dorm life or complain about a given Hall Monitor. Standing there at the door of her office was a very short black man who, by most standards, would be considered unseemly to look at as he clearly had been born with birth defects.

He was unusually small and his face was deformed as he stood holding a cane. Obviously his eyesight was impaired as well. Trying to keep her composure she asked, "Hello, can I help you with something?"

He smiled and replied, "No Ma'am, I just like to come to campus to make friends but most people won't talk to me because I think they are scared of me by the way I look."

Trying to be tactful, she replied, "Not at all! I am not scared of you. You look just fine to me." He giggled again as he placed his backpack on the floor. "Are you having a problem or is there something going on at your dorm that I can help you with?," she asked.

"No Ma'am. You see, I am not a student. I carry this backpack around with me so that the other students will talk with me and be my friend but I don't think it's working very well because no one wants to talk with me very long. I come to campus because there are alot of people here and I want to make friends."

As she looked at him, her eyes began to tear up but she desperately tried to hold her emotions back for fear that he would think she felt sorry for him. The conversation went on as he told her about himself and she told him more about her life and the things that had occurred while dealing with students.

His laugh was infectious and his childlike innocence was so delightful. Before she knew it, she realized that she no longer saw him in the same light as she first did. "Well, I think I've wasted enough of your time so I better leave. You have better things to do than talk with me."

As he reached down to the floor to pick up his backpack, she began to tear up again but this time the tears came not from her feeling sorry for him, but from the respect she had for his being so incredibly brave. Holding back the tears she stated, "You are one of the most kind and beautiful individuals that I've ever met. Promise me that you will come back and visit again as I enjoy talking with you. Do you promise?," she asked.

He smiled and callowly looked down for a moment. "Yes, I promise I will but I have a hard time climbing the stairs. Can I ask you a question Ma'am?" She stood up, as she wanted to shake his hand before he left and replied, "Of course you can. What do you want to know?"

He stood very still as his eyes turned her direction. "Did you really mean what you just said about me?," he asked. Without hesitation she quickly replied, "I've never said anything more true in all my life and I mean that!" He positioned his cane and began to walk out of the door but suddenly stopped and looked her way again.

"I can't see you very good, but for the first time in my life, I believe someone. Thanks for talking to me and being my friend. I'll be back, I believe in someone now!" As he walked slowly out of her office he giggled, smiled, and uttered very softly....."I believe."

"Do not forget to entertain strangers, for by so doing some people have entertained angels without knowing it." Hebrews 13:2