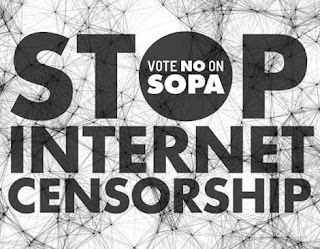 The Internet's largest and most popular general reference has gone dark. Wikipedia has joined a protest against something it believes is even darker: passage of the Stop Online Piracy and Protect Intellectual Property Acts.

SOPA and PIPA have not even made it to the Senate floor, but have already caused public outrage. Internet giants such as Google, YouTube, Yahoo, AOL and many others have likened the bills to China-style censorship. The bills, which are perhaps the most controversial pieces of proposed legislation in recent American history, were supposedly written to protect copyrighted material.

But most believe the bills would cripple the Internet, effectively killing all websites allowing user-uploaded content, endangering potential whistleblowers and severely damaging online freedom of speech. And amid fears they will lead to unprecedented censorship, many web moguls are trying to take matters into their own digital hands.

Today’s blackout is the biggest act of defiance yet. Wikipedia founder Jimmy Wales said on Twitter that the move “will be wow” and that he hopes “it will melt phone systems in Washington,” before urging followers to spread the word. The world’s 6th most visited website joins Reddit, TwitPic, Mozilla, WordPress and others in their protest – a decision that did not, according to Wikimedia Foundation Executive Director Sue Gardner, come lightly.

Gardner said that “it is the opinion of the English Wikipedia community that both of these bills, if passed, would be devastating to the free and open web. Over the course of the past 72 hours, over 1800 Wikipedians have joined together to discuss proposed actions that the community might wish to take against SOPA and PIPA. This is by far the largest level of participation in a community discussion ever seen on Wikipedia, which illustrates the level of concern that Wikipedians feel about this proposed legislation.”

The press release went on to say that “the overwhelming majority of participants support community action to encourage greater public action in response to these two bills. Of the proposals considered by Wikipedians, those that would result in a 'blackout' of the English Wikipedia, in concert with similar blackouts on other websites opposed to SOPA and PIPA, received the strongest support.”

But while the move is most definitely a grand stand, will it do anything more than force students to do their homework early – and perhaps even reintroduce printed reference sources to the digital generation?
It might. The Obama Administration responded to an anti-SOPA and PIPA petition, claiming it “will not support legislation that reduces freedom of expression, increases cybersecurity risk, or undermines the dynamic, innovative global Internet.”

Which was taken by most to mean that these bills will never see life as laws, because all of the above is exactly what SOPA and PIPA do. But has that really ever stopped the US government from pushing through legislation deemed “important”? Look at the Department of Homeland Security's “See something, Say something” program, under which almost any action – including paying cash, buying waterproof matches and having discreet phone conversations in public – can be seen as potential terrorist activity. Look at the NDAA, which allows indefinite detention of anyone, including American citizens, suspected of terrorist activity.

So if you’re sitting there reading this, with some cash in your pocket and a website where someone may have posted something that may lead to something else that is potentially suspicious – expect the might of the US security and legal systems to knock – or bust through your door. They might not even have a warrant, having convenient access to the so-called ‘sneak-and-peak’ granted by the Patriot Act. Of course, those were also created to capture terrorists, but as we’ve established, we may all soon be branded as such because of a YouTube search.

Jokes aside, though – what about the arguments used to push the bill forward? Surely copyright infringement should be battled? And shouldn't the companies losing money everywhere because of pirated content be protected?

They should. But what SOPA and PIPA opponents are so upset about is that the bills are not specific enough; that they’re heaping all Internet users together and branding them as one step short of evil, instead of clearly defining what constitutes an illegal activity and how it can realistically be battled.
For now, however, most, including www.demandprogress.org founder and executive director Aaron Swartz, believe the Acts will change the rules for the Internet not just in the United States, but around the world.

“Under this bill, the rules totally change. It makes everyone who runs a website into a policeman. And if they don’t do their job of making sure nobody on their site uses it for anything that’s even potentially illegal, the entire site could get shut down – without even so much as a trial,” Swartz says.

So before the Acts become final, those in favor of an open information pool for the people are trying to make their final act count.