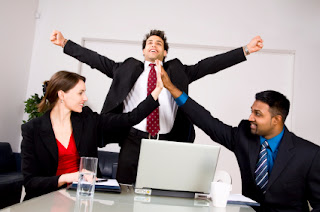 In case you haven't been following my tell-all confessional — I mean Twitter feed — lately, I've been in Manhattan for the last few weeks. Hanging out in all the wrong places (read: painfully hip power hotels), I've had the questionable privilege of overhearing more than my fair share of Very Serious Conversations from the movers and shakers of the world.

And boy, have they been tedious: mostly, about eking out slightly sharper terms for deals for more yawn-inducing stuff (whether flicks, financial instruments, or kicks) that's destined not to matter.
So here's a tiny hypothesis: maybe the real depression we've got to contend with isn't merely one of how much economic output we're generating — but what we're putting out there, and why. Call it a depression of human potential, a tale of human significance being willfully squandered (on, for example, stuff like  this).

If that's the best we can do, no wonder our economy is falling short of its potential — and no wonder our lives occasionally feel empty, even meaningless. (Even star quarterbacks married to Brazilian supermodels occasionally say to themselves, there's got to be more than this.) Hence, If we want to do better, I suggest it's time to get lethally serious about doing stuff that actually matters. So here are three questions to ask about yourself about what you're spending your life doing:

Does it stand the test of time?
Ponder this for a moment: the vast majority spend the vast majority of our lives sweating, suffering, and slogging mightily over stuff that's forgotten by next quarter, let alone next year or next century. Call me crazy, but I'd suggest: mattering means building stuff that's awesome enough to last. Maybe not forever, like Giza's Pyramids — but surely more than a couple of months, before it's absent-mindedly tossed into the dustbin of history along with the rest of the flotsam and jetsam of the age of disposable plastic junk. I'd give you a handful of recent real-world examples, but beyond the labors of love a new generation of artisans are working on, whether microbrews, novels, or games, here's the hard truth: when it comes to the stuff our largest institutions are invested in, I can't think of any, so poor is our cultural performance at standing the test of time. (Just ask yourself: is anybody really going to be watching Mission Impossible 4 a century from now, except a handful of irony-soaked action-movie-worshipping 22nd century hipsters?). Of course, all that really means is that since nearly everyone seems to suck at standing the test of time, you've got a tremendous opportunity not to.

Does it stand the test of excellence?
In most boardrooms, the first and last question asked is: will "the markets," financial and "consumer," like your latest shiny trinket slightly better than the next guy's? Of course, that's a perfect recipe for mediocrity: to have barely satisfied weary, oppressed, jaded "consumers" already trained to demand the bare McMinimum is to have furiously smashed the glass ceiling of  the lowest common mass-market denominator — and little more. Here are some higher bars: do critics, scholars, aficionados, and diehard enemies pan it, or love it? Mattering means recognizing that everyone's opinion is not created equal — some count more than others, for the simple reason that some opinions are more nuanced, educated, sophisticated, historically grounded, and self-aware than others.

Does it stand the test of you?
Sure, I can understand why the dudes and gals I've been overhearing in my little Manhattan adventure are so energized by the stuff they're "working" on — it feels exciting to be part of a buzzing milieu's in-crowd. But let's face it: on our deathbeds, the accomplishments that matter most to most of us probably won't be recounted thus: "In 2012, I sold another thousand copies of someone else's middle-of-the-road blockbuster to an overweening VP with really bad hair and worse manners at a giant monopolistic corporation that was destroying my grandkids' futures. Man, I lived." So while I too sometimes feel enchanted by the seductive power of glittering fantastic excess that seems to have mesmerized my little informal sample of Manhattanites, I'd also like to challenge them — and you — to consider the questions of mattering in a slightly more sophisticated, humane, considered way. It's one thing to work on stuff that seems sexy because it's socially cool and financially rewarding. But fulfillment doesn't come much from money or cool-power — all the money in the world can't buy you a searing sense of accomplishment.

Being human is never easy. But that's the point. Perhaps as an unintended consequence of our relentless quest for more, bigger, faster, cheaper, now, we've comfortably acceded to something akin to a minor-league contempt for the richness and grandeur of life unquenchably meaningfully well lived. Hence, call this post my tiny statement of rebellion. Hex me with all the bland management jargon in the world, zap me with all the perfect theories and models you like, but I'll never, ever accept the idea that triviality, mediocrity, and futility are appropriate goals for any human being, much less our grand,  splintering systems of human organization.

We're all built differently — but none of us is here to not make a difference. So what are your three questions for getting lethally serious about doing stuff that matters?

UMAIR HAQUE
Umair Haque is Director of Havas Media Labs and author of Betterness: Economics for Humans and The New Capitalist Manifesto: Building a Disruptively Better Business. He is ranked one of the world's most influential management thinkers by Thinkers50. Follow him on twitter @umairh.