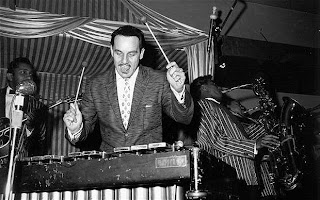 The son of Greek immigrants, he was brought up in the 1920s in a predominantly black area of California. His decision as a young man to identify with black people and their music led him to develop an instinct for finding black talent, and he discovered Little Richard, Jackie Wilson, Hank Ballard — and Etta James.

“Yes, I chose,” Otis reflected in 1979, “because despite all the hardships, there’s a wonderful richness in black culture that I prefer.”

But he was much more than a talent-spotter. Often called the “godfather of rhythm and blues”, Otis sang, played drums and vibraphone, and broadcast as a disc jockey. He also wrote songs, notably the 1958 hit Willie and the Hand Jive. With a beat recalling the 1955 hit Bo Diddley, the number was inspired by the British craze for hand jiving, which had originated a year earlier in a coffee bar in Soho.

A trio of black American women singers called Three Tons Of Joy had appeared on the British television pop show 6.5 Special with their version of Ma, He’s Making Eyes At Me. On their return to Los Angeles, they told Otis about the strange phenomenon they had witnessed in the studio, where the audience had hand jived in time to the beat.

Noting that the craze was at its peak, Otis promptly wrote and recorded Willie and the Hand Jive, which became the most successful of his many recordings. Another of his compositions, Every Beat of My Heart, became a debut chart hit for Gladys Knight and the Pips in 1961.

Johnny Otis was born Ioannis Alexandres Veliotes on December 28 1921 at Vallejo, north-east of San Francisco, and brought up in Berkeley, where his father ran a grocery store in a mainly black community. “When I got near teen age, I was so happy with my friends and the African-American culture that I couldn’t imagine not being part of it,” Otis said in 1991.

He started playing drums with a blues band called The Houserockers in the late 1930s. He fronted a swing-era big band in the 1940s, and had his first hit with an instrumental, Harlem Nocturne, which became one of the most distinctive numbers of the big band era. In 1955 he wrote the song that became Etta James’s first chart hit, The Wallflower, popularly known as Roll With Me Henry.

The young songwriters Jerry Leiber and Mike Stoller were Otis fans, and released their first record, That’s What The Good Book Says, featuring an act that Otis had discovered, Bobby Nunn and the Robbins.

In 1951 Otis invited Leiber and Stoller to meet Big Mama Thornton. “She just knocked us out,” said Stoller. “She was a very formidable person. Very large. She had some razor scars on her face and had a very salty, nasty disposition. Of course, underneath that, she was like a marshmallow. But it was her whole demeanour that sparked this kind of angry thing in the lyrics of Hound Dog, which, of course, was written as a woman’s song.”

When Thornton recorded Leiber and Stoller’s original Hound Dog in 1952 (the pair had written it in just 15 minutes), Otis was the session producer. He also sat in for the drummer, whose efforts on the song had failed to impress . In turn, Lieber and Stoller took Otis’s place in the recording cubicle, marking their debut as producers.

When the British pop invasion of the United States began in earnest with the first Beatles tour in 1964, “the white boys from England came over with a recycled version of what we created. We were out of business, man,” Otis recalled.

But he continued to make music with his own band, a lively fusion of blues, gospel, swing and jazz, before retiring in the 1970s, turning his house into the non-denominational Landmark Community Church and appointing himself pastor.

In the 1960s he stood unsuccessfully for a seat in the California State Assembly before becoming chief of staff for a Democratic Congressman, Mervyn Dymally.

Johnny Otis is survived by Phyllis, his wife of 60 years, and their children, two of whom, Nick and Shuggie, played in his band.