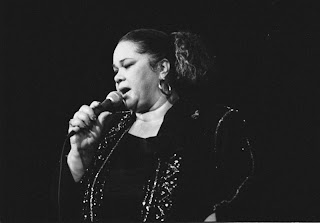 Etta James, whose assertive, earthy voice lit up such hits as "The Wallflower," "Something's Got a Hold on Me" and the wedding favorite "At Last," has died, according to her longtime friend and manager, Lupe De Leon. She was 73.


James was hospitalized in January 2010 to treat an infection caused by MRSA. During her hospitalization, her son Donto revealed that James had been diagnosed with Alzheimer's disease in 2008, and attributed her previous comments about Beyoncé Knowles to "drug induced dementia".


She was diagnosed with leukemia in early 2011. The illness became terminal and she died on January 20, 2012, just five days before her 74th birthday, at Riverside Community Hospital in Riverside, California.


She died from complications from leukemia with her husband, Artis Mills, and her sons by her side, De Leon said.

She was diagnosed with leukemia in 2010, and also suffered from dementia and hepatitis C. James died at a hospital in Riverside, California. She would have turned 74 Wednesday.

" This is a tremendous loss for the family, her friends and fans around the world," De Leon said. "She was a true original who could sing it all -- her music defied category.

"I worked with Etta for over 30 years. She was my friend and I will miss her always."

Was "At Last" your song for your wedding's first dance?

The powerhouse singer, known as "Miss Peaches," lived an eventful life. She first hit the charts as a teenager, taking "The Wallflower (Roll With Me, Henry)" -- an "answer record" to Hank Ballard's "Work With Me, Annie" -- to No. 1 on the R&B charts in 1955. She joined Chess Records in 1960 and had a string of R&B and pop hits, many with lush string arrangements. After a mid-decade fade, she re-emerged in 1967 with a more hard-edged, soulful sound.

Throughout her career, James overcame a heroin addiction, opened for the Rolling Stones, won six Grammys and was voted into the Rock and Roll Hall of Fame. Despite her ups and downs -- including a number of health problems -- she maintained an optimistic attitude.

"Most of the songs I sing, they have that blue feeling to it. They have that sorry feeling. And I don't know what I'm sorry about," she told CNN's Denise Quan in 2002. "I don't!"

Through it all, she was a spitfire beloved by contemporaries and young up-and-comers.

"Etta James is unmanageable, and I'm the closest thing she's ever had to a manager," Lupe DeLeon, her manager of 30-plus years, told CNN in admiration.

British songstress Adele named James as one of her favorite singers, along with Aretha Franklin.

"If you were to look up the word singer in the dictionary, you'd see their names," Adele said in an interview.

Etta James was born Jamesetta Hawkins in Los Angeles to a teen mother and unknown father. (She suspected her father was the pool player Minnesota Fats.)

Her birth mother initially took little responsibility and James was raised by a series of people, notably a pair of boardinghouse owners. But she was recognized from a young age for her booming voice, showcased in a South Central Los Angeles church.

In 1950, her mother took her to San Francisco, where James formed a group called the Peaches. Singer Johnny Otis, best known for "Willie and the Hand Jive," discovered her and had her sing a song he wrote using Ballard's tune as a model. "The Wallflower," with responses from "Louie Louie" songwriter Richard Berry, made James an R&B star.

Her signing to Chess introduced her to a broader audience, as the record label's co-owner, Leonard Chess, believed she should do pop hits. Among her recordings were "Stormy Weather," the Lena Horne classic originally from 1933; "A Sunday Kind of Love," which dates from 1946; and most notably, "At Last," a 1941 number that was originally a hit for Glenn Miller.

James' version of "At Last" starts out with swooning strings and the singer enters with confident gusto, dazzlingly maintaining a mood of joy and romance. Though the song failed to make the Top 40 upon its 1961 release -- though it did hit the R&B Top 10 -- its emotional punch has long made it a favorite at weddings.

James' career suffered in the mid-'60s when the British Invasion took over the pop charts and as she fought some personal demons. But she got a boost when she started recording at Rick Hall's FAME Studios in Muscle Shoals, Alabama. Her hits included the brassy "Tell Mama" and the raw "I'd Rather Go Blind," the latter later notably covered by Rod Stewart.

She entered rehab in the 1970s for her drug problem but re-established herself with live performances and an album produced by noted R&B mastermind Jerry Wexler. After another stint in rehab -- this time at the Betty Ford Clinic -- she made a comeback album, "Seven Year Itch," in 1988.

James mastered a range of styles -- from R&B and soul to jazz and blues -- but she was always one step behind the popular genre of the day, said Michael Coyle, a Colgate University professor who has written about jazz and R&B and reviews records for Cadence Magazine.

"She never really got her moment in the sun," Coyle said.

But James soldiered on, and by the end of her life she had made so much meaningful music that she was considered a living legend. "By the mid-'90s, she's survived so long that people start to look up to her," Coyle said.

James was portrayed by pop star Beyonce in the 2008 film "Cadillac Records," about Chess. After Beyonce sang "At Last" at one of President Barack Obama's 2009 inaugural balls, James lashed out: "I can't stand Beyonce. She had no business up there singing my song that I've been singing forever." She later told the New York Daily News she was joking.

Earlier this year, news reports revealed that the singer's estate was being contested in a legal struggle between her husband, Artis Mills, and son Donto James. (Donto and her other son, Sametto, both played in her band.)

Over the years, James had her share of health problems. In the late 1990s she reportedly weighed more than 400 pounds and required a scooter to get around. In 2003 she had gastric bypass surgery and dropped more than half the weight, according to People magazine.

However, until her latest issues, James maintained a steady touring schedule and appeared full of energy even when sitting down -- as she sometimes did on stage, due to bad knees and her weight battles.

Even while sitting down, James gave it her all on stage, singing as though possessed, caressing every note like a long-lost love. If that seemed a little much to critics, well, the legendary singer had a show to put on, she told Quan.

"They said that Etta James is still vulgar," she said in the 2002 interview. "I said, 'Oh, how dare 'em say I'm still real vulgar! I'm vulgar because I dance in the chair?' What would they want me to do? Want me to just be still or something like that?

--------
Suggested by Fredy Liwang, Orlando
http://edition.cnn.com/2012/01/20/showbiz/etta-james-obit/index.html
http://en.wikipedia.org/wiki/Etta_James
Posted by pratanacoffeetalk at 8:10 AM