EATING ONE SAUSAGE EVERYDAY WILL INCREASE THE RISK OF CANCER 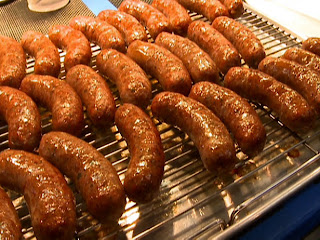 A link between eating processed meat, such as bacon or sausages, and pancreatic cancer has been suggested by researchers in Sweden.

They said eating an extra 50g of processed meat, approximately one sausage, every day would increase a person's risk by 19%.

But the chance of developing the rare cancer remains low.

The World Cancer Research Fund suggested the link may be down to obesity.

Eating red and processed meat has already been linked to bowel cancer. As a result the UK government recommended in 2011 that people eat no more than 70g a day.

Prof Susanna Larsson, who conducted the study at the Karolinska Institute, told the BBC that links to other cancers were "quite controversial".

She added: "It is known that eating meat increases the risk of colorectal cancer, it's not so much known about other cancers."

The study, published in the British Journal of Cancer, analysed data from 11 trials and 6,643 patients with pancreatic cancer.

It found that eating processed meat increased the risk of pancreatic cancer. The risk increased by 19% for every 50g someone added to their daily diet. Having an extra 100g would increase the risk by 38%.

Prof Larsson said: "Pancreatic cancer has poor survival rates. So as well as diagnosing it early, it's important to understand what can increase the risk of this disease."

Cancer Research UK said the risk of developing pancreatic cancer in a lifetime was "comparatively small" - one in 77 for men and one in 79 for women.

Sara Hiom, the charity's information director, said: "The jury is still out as to whether meat is a definite risk factor for pancreatic cancer and more large studies are needed to confirm this, but this new analysis suggests processed meat may be playing a role."

However, she pointed out that smoking was a much greater risk factor.

Dr Rachel Thompson, the fund's deputy head of science, said: "We will be re-examining the factors behind pancreatic cancer later this year as part of our Continuous Update Project, which should tell us more about the relationship between cancer of the pancreas and processed meat.

"There is strong evidence that being overweight or obese increases the risk of pancreatic cancer and this study may be an early indication of another factor behind the disease.

"Regardless of this latest research, we have already established a strong link between eating red and processed meat and your chances of developing bowel cancer, which is why WCRF recommends limiting intake of red meat to 500g cooked weight a week and avoid processed meat altogether."