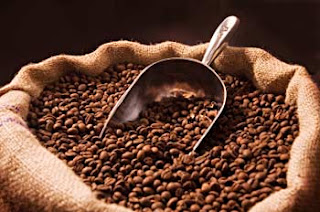 Coffee is one of the most pervasive drinks on earth, found nearly everywhere from Tucson to Timbuktu, from Beijing to Burundi. There is hardly a culture where it is not entrenched, one of the first things billions of hands reach for every morning. Like its main competitor, tea, it is said to have health benefits. Both have an active ingredient, caffeine, which helps to wake us up and keep us going. Coffee drinking, however, is a comparatively recent activity, far younger than tea or alcohol consumption.


Coffee comes from a bright berry that appears on the coffee bush or small tree. The coffee bean is actually the seed inside the berry, which looks like a bean - hence the misnomer. This seed contains the caffeine. From the plant’s point of view however, the bitter taste of caffeine is intended as a natural defense against animals who otherwise would eat the bright berries! 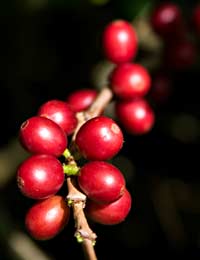 The most common coffee beans come from the Coffea arabica plant. Once the bean has been separated from the berry it needs to be roasted to bring out the right flavors and taste.

The coffea arabica name is a clue to the origin and spread of coffee, which was via the Arab and Muslim worlds to Europe, Asia and America. The coffee plant itself is thought to be native to the highlands of Ethiopia. Legend (as written in the 17th century) describes the 9th century goatherd Kaldi who noticed that his herd seemed ever more active after eating coffee berries. Local priests were told of his discovery. After trying the berries for themselves, they too were impressed by the energy it gave them. Slowly, the coffee bean’s reputation spread. This led to the plant being taken to the trading center of Yemen in the Arabian peninsula.

Once established in Yemen, coffee’s usage spread. The first written evidence of coffee drinking appears in the Arab world in the 14th century, where it is associated with Sufi monasteries in Yemen. In fact, once again etymology is revealing. The primary Yemeni port in the 15th century was Mocha. It is from here that coffee beans were shipped around the world for the next two centuries. Beans from Mocha became known for their chocolate flavor, and today the word mocha is still used to designate chocolaty coffee.

From the beginning, coffee was controversial. Sufis drank it to help them stay up all night in trances or meditation, and this effect made it suspicious to conventional authorities. It was called a drug. This was true not only in the Muslim world, but in Europe as well. A 17th century Turkish Sultan had to offer a law permitting the consumption of coffee in the Ottoman Empire. A similar problem arose in Italy, which had been introduced to coffee by the Ottomans. Pope Clement VIII had to authorize coffee usage, and the first European coffee house is said to have opened in Venice in 1645 (the image above shows the inside of another old Venetian coffee house).

As coffee drinking spread, so did the desire for coffee plants. A loosely-guarded Yemeni monopoly of plants was soon broken by various European powers, including the Dutch, who brought the coffee plant to their colonies in India and Indonesia (the source of Java coffee, another still common term for a cup of coffee). The Portuguese brought coffee to their Brazilian colony, and today Brazil is the largest coffee producer in the world. Its neighbor Colombia is the third largest producer. The second largest is Vietnam, where coffee production was taken on relatively recently because it is such a lucrative product. The fourth and fifth largest producers are, respectively, Indonesia and India, although among some gourmet coffee drinkers, Ethiopian varieties are still considered to be the finest. Coffee is grown in some 70 countries around the world, which produce roughly 8 million tons of coffee each year.

The Cafe sign on the corner represents a vast industry. Almost 25 million people make a living growing coffee. Each year 500 billion cups of coffee are consumed around the world. That is about 80 cups a year per human being! Coffee has been transformed from the its origins in Ethiopia and Yemen into a truly universal drink.
----------
http://www.chevroncars.com/learn/arts-culture/the-story-of-coffee
Posted by pratanacoffeetalk at 9:34 AM