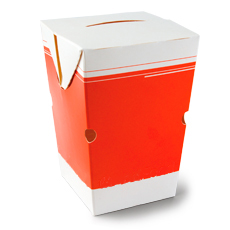 (NaturalNews) Toxic chemicals used to line fast food wrappers migrate easily into human blood, according to a study conducted by researchers from the University of Toronto and published in the journal Environmental Health Perspectives.

Oily foods such as fast food and microwave popcorn are regularly packaged in paper or cardboard coated with polyfluoroalkyl phosphate esters (PAPs), which prevent water or grease from leaking through the packaging.

A prior study by the same research team confirmed that PAPs can migrate from packaging into food, and thereby be ingested. This is an issue of particular concern, because the body can metabolize PAPs into a highly toxic class of chemicals called perfluorinated carboxylic acids (PFCAs).

The most infamous PFCA is perflurooctanoic acid (PFOA, also known as C8) the active ingredient in Teflon. PFOA and other PFCAs have been linked to a wide variety of health problems including changes in cholesterol and sex hormones. They have produced tumors and even infant death in animal studies.

"PFOA used in non-stick pans (fast-food containers, carpets, furniture and a host of other everyday household products) accumulates in the umbilical cords of babies and is retarding their growth and brain development, according to two new studies published in the prestigious journal Environmental Health Perspectives (August 2007)," notes Andreas Moritz in the book Timeless Secrets of Health & Rejuvenation.

"Babies whose umbilical cords had the highest concentrations of PFOA were born lighter, thinner and with smaller head circumferences than others."

In the new study, researchers exposed rats to PAPs and confirmed that they were indeed metabolized into PFOA.

"This discovery is important because we would like to control human chemical exposure, but this is only possible if we understand the source of this exposure," researcher Scott Mabury said.

He noted that the findings refute attempts "to locate the blame for human exposure on environmental contamination that resulted from past chemical use rather than the chemicals that are currently in production."