ANOTHER REASON TO AVOID FAST FOOD: THE WRAPPER 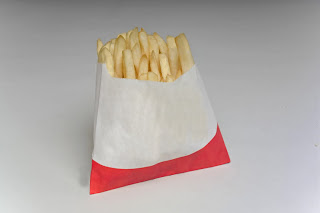 In case you needed another reason to avoid fast food, a new study found that diPAPs coating fast food wrappers are present in our blood. And diPAPs break down to PFOA – a compound linked to a host of adverse health effects, such as developmental toxicity and, most recently, lowered sperm counts in young men.

The study looked at diPAPs – or polyfluoroalkyl phosphoric acid diesters – in blood samples. The concentrations found in the human blood samples were in low part per billion levels, but were 100 times the level found in sewage sludge.

Where do diPAPs come from? diPAPs are used to make fast food wrappers grease resistant. Are diPAPs a health concern? We don’t know. They are part of the class of chemicals knowns as perfluorinated compounds. While diPAPs haven’t been shown to have any human health effects (yet), they do break down to PFOA, and PFOA is linked to cancer, developmental toxicity and other problems.

The researchers found a clear link between food packaging and the presence of diPAPs in the blood. In other words, the diPAPs were present in the blood as a result of leaching from food packaging.
If you are interested in reducing exposure, you can avoid fast food. Of course, keep in mind that perfluorinated compounds are used as grease, stain, soil and water repellants in many applications, from microwave popcorn to textiles. So you need to avoid those exposures as well.

But, to avoid diPAPs in food packaging, just avoid fast food packaging. Okay, so I know most busy parents can’t avoid fast food altogether (McDonalds can well be a life saver on a crazy day), but you can take it out of the packaging as quickly as possible. Take the french fries out of the container and dump them in the bag. Take the hamburger out and put it on a tray kept in the car. Simple steps and you can reduce your exposure.
---------
http://www.thesmartmama.com/leaching-perfluorinated-compounds-another-reason-to-avoid-fast-food/
Posted by pratanacoffeetalk at 3:44 PM