The Darkest Hour is an upcoming 3D American science-fiction horror film directed by Chris Gorak and produced by Timur Bekmambetov. The American-based production depicts an alien invasion in Russia and stars Olivia Thirlby and Emile Hirsch as young people caught in the invasion. The film has a release date scheduled for December 25, 2011 in the United States and Russia. 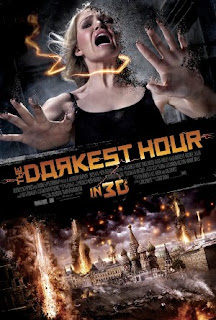 The Darkest Hour is directed by Chris Gorak and produced by Timur Bekmambetov. While most films about alien invasions are centered in the United States or have an international scale, Bekmambetov's involvement ensured the premise to be an alien invasion from Russia's perspective.

With a production budget of US$40 million, filming with 3D cameras began in Moscow on July 18, 2010. Production used resources from the Russian-based company Bazelevs, owned by Bekmambetov. Filming was temporarily suspended three weeks later due to the 2010 Russian wildfires affecting the city and its vicinity with its smog. By September 2010, filming had resumed, and it was announced that the release date would remain unchanged. As of April 7 though, the release date has changed to December 25, due to filming conflicts in Russia.